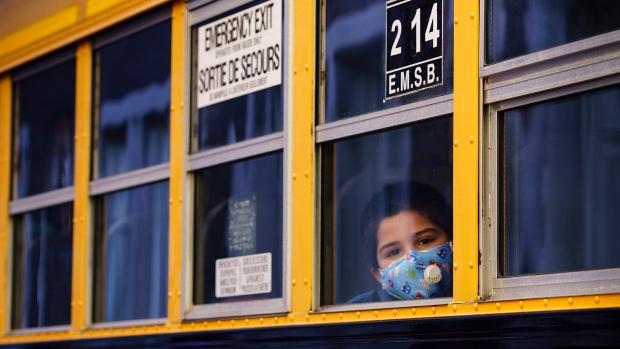 A student peers through the window of a school bus as he arrives at the Bancroft Elementary School in Montreal, on August 31, 2020. THE CANADIAN PRESS/Paul Chiasson

Ontario’s second round of asymptomatic testing in schools has found a low number of COVID-19 cases in classrooms across the province.

Officials reported that of the 3,702 tests conducted in schools in five regions, including in major COVID-19 hot spots like Toronto and Peel, 32 cases were found yielding a positivity rate of 0.86 per cent.

Ontario Education Minister Stephen Lecce welcomed the news on Monday, saying that the government will continue to keep schools “safe and open.”

“We will continue to follow the best expert medical advice and continue to implement strict measures to protect our schools and our province,” he said.

Last December, when the province first began the testing pilot program, official logged 57 cases after 3,600 tests were completed in hot spot regions. More than 19 of those cases were found in one Toronto school.

This time, during the second round of asymptomatic testing, between Feb. 11 and 13, at least 11 of the 917 people tested across 40 schools in Toronto had COVID-19.

In-class instruction in both Peel and Toronto did not resume until after this round of testing was completed. More limited classroom programming for special needs student was underway during the length of the lockdown and stay-at-home order.

The province says that while most of the people tested in the second round of the program were asymptomatic, officials did also offer tests to some symptomatic students and staff, as well as members of their households.

The province said it plans to release the data on asymptomatic testing on a weekly basis. No breakdown of which schools were selected in each jurisdiction was provided, or the reasoning behind the selection.

The Ontario Ministry of Education said it wants all school boards to conduct testing in at least five per cent of schools in their jurisdiction every week.

“Our government has taken action to deploy asymptomatic testing province-wide, the first program of its kind in Canada,” Lecce said on Monday. “I encourage all students, staff and families to take advantage of this program – which uses the least invasive testing options possible.”

Health experts and teachers had been urging the government to expand the asymptomatic testing program as more students returned to school last week amid concerns around the spread of new COVID-19 variants.

In schools across the province, according to the latest data, 55 more cases of COVID-19 were found. Forty-seven of those cases were students, and eight were staff members at the schools.

There are currently 278 schools with a reported active case of the novel coronavirus across the province, 10 of which are closed.