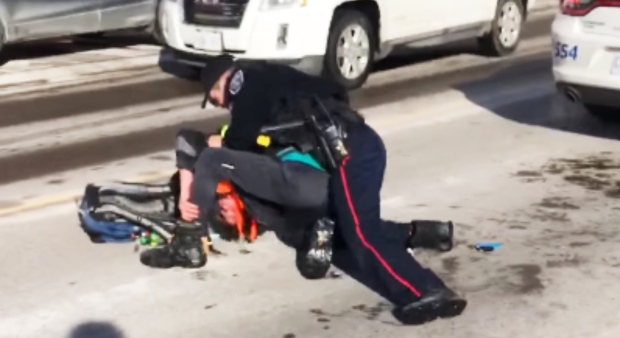 A cell phone video captured a Barrie police officer holding a man to the ground during an arrest on Dunlop Street on Thurs., Feb. 4, 2021

A Barrie police officer is now facing assault charges following a violent arrest that was caught on video and subsequently posted to social media.

The video shows the arrest of a 20-year-old man on Dunlop Street on the afternoon of Feb. 4.

In it, the officer can be seen hitting the man on the head with what appears to be a Taser as he pins him to the ground and threatens to “"light [him] up.” He then slams the man’s head into the pavement as he flips him onto his stomach.

The video does not show what led up to the incident but the individual who was taken into custody, Skyler Kent, previously told CTV News Barrie that he had rode his skateboard through a red light prior to being pulled over.

He said that the officers eventually issued him a ticket and after they did he skateboarded away, calling them names as he left.

At that point, he said that the officers pulled him over again and that’s when the incident that was caught on camera began.

“I was resisting, but I wasn't trying to fight him. There was no part of me that was trying to hit him or hurt him,” he said.

After the video was posted to Facebook by a concerned citizen, Barrie police asked the Ontario Provincial Police to conduct an independent investigation.

In a news release issued Thursday, the OPP said that they have now concluded that investigation and charged Constable Jason Stamp, 46, with assault and assault with a weapon.

Stamp is scheduled to appear before the Ontario Court of Justice in Barrie on June 7.