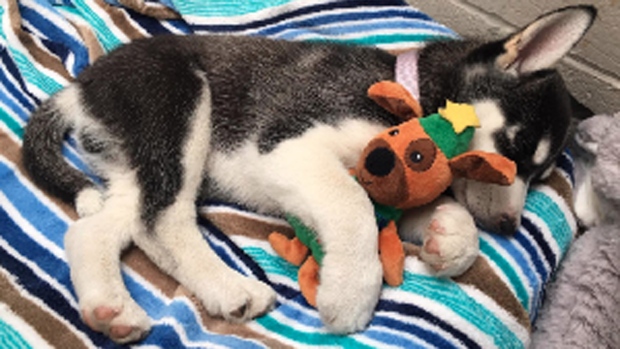 Bear, a puppy who overdosed on marijuana, is pictured in this handout photo. (BC SPCA /Handout)

VANCOUVER - The British Columbia SPCA is warning dog owners about the dangers of recreational marijuana to their pets now that it's legal.

The Vancouver branch says in a news release that an 11-week old husky puppy named Bear nearly died of a drug overdose.

When Bear was surrendered to the shelter he appeared lethargic and staff knew something was wrong and by the time he was rushed to a veterinarian he was already unconscious.

Blood work showed the puppy had consumed a toxic level of THC, the psychoactive ingredient in marijuana.

The release from the society says if you suspect a pet has ingested drugs, the animal needs to be taken immediately for care.

Vancouver branch manager Jodi Dunlop says some people may be reluctant to be up front about what happened, but it could be a matter of life or death for the pet.