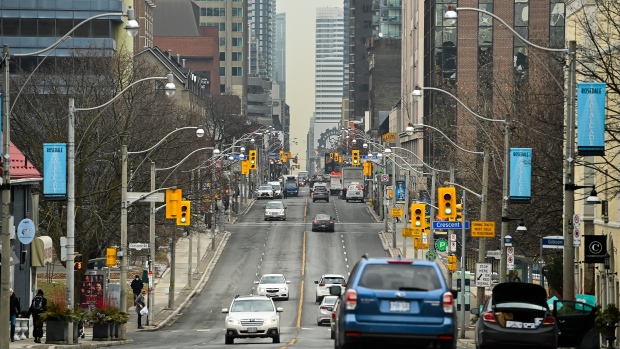 Traffic moves along Yonge Street during the COVID-19 pandemic in Toronto on Thursday, January 14, 2021. The province of Ontario is currently under an emergency order lockdown. THE CANADIAN PRESS/Nathan Denette

A busy stretch of Yonge Street could soon be transformed with the addition of bicycle lanes, on-street patios and other public realm improvements.

City staff are recommending that a 3.2 kilometre stretch of Yonge Street from Bloor Street to Davisville Avenue be revamped as part of a complete streets pilot project.

The changes would be similar to the transformation of Danforth Avenue last summer and would include on-street patios, streetscape improvements, temporary bikeways, space for parking, loading, and deliveries, as well as road safety improvements.

Staff actually considered a similar revamp of Avenue Road and Mount Pleasant Avenue but ultimately concluded that Yonge Street was the most logical option for a redesign of a major north-south artery.

In a report that will go before the infrastructure and environment committee next week, staff say that 90 per cent of the frontage on Yonge between Bloor and Davisville is designated for mixed-use. They said that means there is “a high number of destinations to which people want to travel to and largest potential to support local businesses through streetscape improvements.”

Staff also said that the artery has more “pressing safety concerns” that can be addressed through a complete street pilot project, having been the site of 10 serious or fatal collisions involving pedestrians over a four-year period. Mount Pleasant Avenue and Avenue Road only had a handful of pedestrian-involved collisions resulting in fatalities or serious injuries over the same time period.

The revamp of Yonge Street will result in the removal of some parking spaces, though the staff report notes that the details of the project are still being worked out and it is too early to determine how many spots might be impacted.

It also cited data from a survey conducted following last summer’s transformation of Danforth Avenue, which found only a minimal change in the percentage of people who said it was easy or very easy to find parking in the area – 75 per cent versus 71 per cent.

In addition to the changes along Yonge Street, staff are also recommending that the pandemic-inspired weekend closure of some major streets to give pedestrians and cyclists more space to manoeuver be made a permanent fixture.

Staff are recommending that the ActiveTO closures of Lake Shore Boulevard East and Bayview Avenue resume in the spring and continue through the summer and fall.

But they say that the recurring weekend closures of Lake Shore Boulevard West “likely cannot be accommodated in 2021 and 2022” due to nearby construction at the intersection of King Street, Queen Street and Roncesvalles Avenue.

Last year the closure along Lake Shore Boulevard West between Windermere and Stadium Roads was the most utilized ActiveTO corridor, attracting an average of 18,000 cyclists and 4,000 pedestrians each weekend.

In a news release issued on Tuesday morning, Mayor John Tory said that the ActiveTO program was a “tremendous success” in 2020 and made sense to bring back in 2021.

He said that while planning is continuing, the report makes clear “we are doing everything we can as a City government to support more active transportation options.”