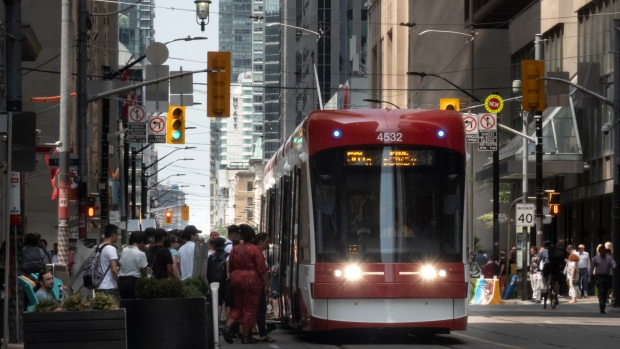 A new report has found that Black and Indigenous residents are “grossly over-represented” in TTC enforcement data and that the disparity is significant enough to support allegations of racial bias.

Two University of Toronto researchers retained by the TTC looked at more than 121,000 documented enforcement incidents between 2008 and 2018.

They found that while Black people only make up 8.8 per cent of Toronto’s population, they were involved in 19.2 per cent of all enforcement incidents during the study period.

Similarly, Indigenous people were involved in three per cent of all enforcement incidents despite making up only 0.8 per cent of Toronto’s population.

Meanwhile, the report found that white people were involved in enforcement incidents at a rate consistent with their share of the population and that all other ethnicities were under-represented in the data.

“The size of the observed racial disparities are, at a minimum, consistent with allegations of racial bias,” the report states. “All else being equal, if people from all racial backgrounds are treated equally by TTC enforcement officials, we would not expect to uncover racial disparities as large as those documented in our analysis.”

The report said that that the racial disparities observed in TTC enforcement activity “declined significantly” between 2008 and 2018.

The authors of the study, however, point out that “racial disparities in TTC enforcement data declined at precisely the same time that missing racial data increased.”

That, they say, raises questions about the reliability of the data.

“We feel that it is highly likely that the increase in missing racial information between 2008 and 2018 serves to mask or obscure the true extent of racial disparities in TTC enforcement activities,” they write in the report.

Disparities consistent regardless of route, location

The researchers said that the disparities in racial data were consistent “regardless of the route or location” and across all major offence categories.

They said that they also continued to exist, even when they excluded individuals that were involved in multiple incidents and accounted for things like higher public transit usage among certain groups.

The researchers conceded that some individuals might point to the “under-representation of Asians, South Asians and other minorities as evidence that the system is not racially biased.”

But they say that we cannot “dismiss the possibility that bias – conscious, unconscious and systemic – has contributed significantly to the gross racial disparities observed in the TTC enforcement data.”

The TTC first commissioned the report in 2019 after a number of high-profile incidents involving alleged racial discrimination and racial bias by members of its fare enforcement unit.

In a news release issued on Thursday afternoon, TTC CEO Rick Leary welcomed the findings and said that it will influence the “significant organizational culture shift” already underway “with respect to prioritizing diversity and inclusion.”

“The doctors' insights are essential in helping us recognize where and how our past practices fell short and will help us make improvements across the TTC. Diversity and inclusion are areas where the TTC has made improvements, but ultimately we can and must do better,” he said.

The report will be considered by the TTC board during a meeting scheduled for April 14.