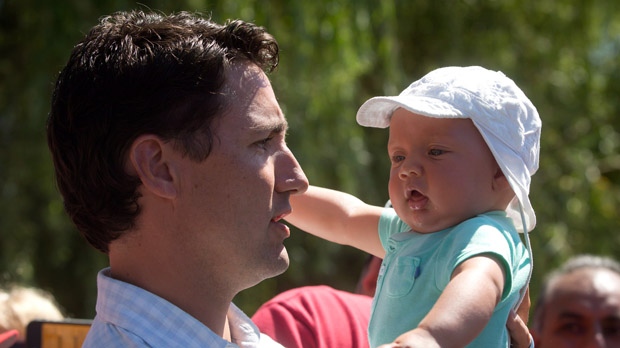 OTTAWA -- Justin Trudeau is re-evaluating the amount of time he spends on the road after his Ottawa home was burglarized while his wife and three young children were sleeping.

The Liberal leader was in Winnipeg at the time of the break-in early Saturday.

Trudeau says he and his wife, Sophie Gregoire-Trudeau, have had some "very serious discussions" over the past 24 hours about the extensive travel his role as leader of the third party demands and the exposure it places on his young family.

Travelling the country is an integral part of the job of rebuilding the once-mighty party and he says he can only do that if he feels confident that Sophie, Xavier, Ella-Grace and infant Hadrien are safe.

Trudeau says the break-in gives him pause about his ability to be away from his family so much of the time.

Of all the sacrifices political families must make, he says security shouldn't be one of them.

"There's no question that Sophie and I have had some very serious conversations over the past 24 hours ... about this path we're undertaking together and the amount of, I don't know, I guess exposure that comes with it.

"We're in a good head space but it certainly is serving as a bit of a wake-up call for us or at least a highlighting of some of the real challenges that we face."

In order to maximize the amount of time he can spend at home, Trudeau moved his family to a house in Ottawa's tony Rockcliffe neighbourhood from Montreal shortly after taking the helm of the Liberal party 16 months ago.

Still, he is out of nation's capital much of the time.

"It's basically a tenet of me being able to do the job that I do that I think my family is safe and OK and it's not a dangerous thing that I'm not there for them," Trudeau said.

"And when my wife and kids, with the nanny, are at home on their own and someone breaks in and engages in some fairly disturbing behaviour, I think it's certainly something that gives me pause in my ability to do the travelling and the job that I'm doing that takes me away from them so much.

"For all the sacrifices that we put through in our line of work, the one thing that we don't feel that we should have to sacrifice is personal security."

Trudeau would not go into details about the break-in or whether there was some political dimension to it, saying he doesn't want to "short-circuit" the police investigation.

CBC News reported Sunday that a menacing message was left outside Trudeau's back door, set atop a pile of items taken from the house, including kitchen knives. According to a police source, CBC said the message stated that the items could have been stolen but weren't, so the family should lock its doors in the future.

Trudeau told The Canadian Press he's been heartened by the supportive response of other politicians, from all parties.

"Every single elected official, all parties together, have been extraordinarily both supportive and touched by this -- in the wrong way because you can see that there but for the grace of God go any one of us.

"I really have to say this is one of those things that there is no partisanship on it."

Asked if they've considered moving house again after the traumatizing break-in, Trudeau joked: "Hopefully, there'll be a move next year into a more secure place" -- referring to his hope of winning the 2015 election and moving into the prime minister's official residence.

However, 24 Sussex has proven it's not immune to break-ins, despite the constant presence of security cameras and an RCMP security detail.

In late 1995, a disturbed Andre Dallaire wandered the grounds and residence for almost an hour, on an ostensible mission to kill then-prime minister Jean Chretien to avenge the loss of sovereigntist forces in the recent referendum on Quebec independence.

The diagnosed paranoid schizophrenic was discovered by Chretien's wife, Aline, outside the couple's bedroom, holding a knife. She slammed the door, alerted the RCMP and woke her husband, who armed himself with an Inuit carving with which to bash the intruder, which did not ultimately prove necessary.

Chretien later revealed his wife was so traumatized by the incident that she refused to sleep at 24 Sussex for weeks afterward.