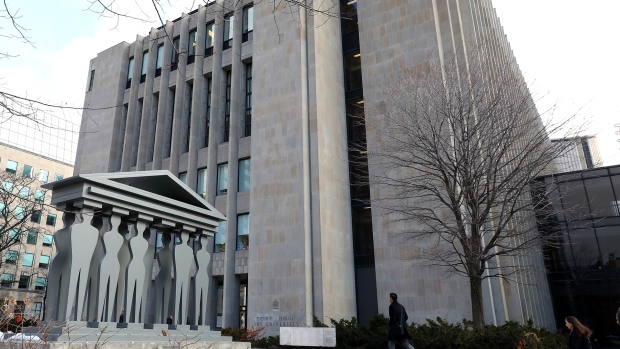 The Ontario Superior Court building is seen in Toronto on Wednesday, Jan. 29, 2020. THE CANADIAN PRESS/Colin Perkel

TORONTO - A city bus driver whose licence was revoked after she lost her eye to cancer has won her battle to have the relevant provincial regulations declared unconstitutional.

In her ruling this month, Ontario Superior Court Justice Jessica Kimmel decided the rules, aimed at enhancing road safety, are unfair to the monocular - those with sight in only one eye.

“These vision standards are based on, and perpetuate, the stereotype that monocular drivers are not able to safely drive public transit vehicles,” Kimmel found. “They create or perpetuate a discriminatory disadvantage without allowing for individual exemption based on the actual driving capabilities and characteristics of individual monocular drivers.”

Kimmel put her unconstitutionality finding on hold for 12 months to give the province time to redo the rules, and the driver who launched the case will have to remain unlicensed in the interim.

Liliana Di Cienzo, a bus driver with an unblemished driving record in Oakville, Ont., lost her right eye to cancer in October 2013 when she was 41 years old. As a result, the province revoked her Class C commercial licence under a section of the Highway Traffic Act that bars a person with one eye from holding the permit.

Court documents show Di Cienzo maintained she could drive safely using her left eye when she tried returning to work about a year after her eye removal.

The Ministry of Transportation, however, said vision regulations precluded her holding a licence, effectively ending her driving career.

“I was pretty much shocked,” Di Cienzo, of Hamilton, said in an interview. “I was certain that I'd at least be given a road test to prove I could do it.”

Di Cienzo, who is allowed to drive passenger vehicles, argued the rules discriminated against those with physical disabilities. Backed up by a provincial study from 1998, she argued little evidence exists to show the one-eyed - as a group - are unsafe commercial drivers, and she should have the chance to prove she can drive buses safely.

“The Ministry of Transportation found me guilty right away,” she said. “They basically gave me a life sentence for doing nothing wrong.”

After several failed legal manoeuvres, the province argued in court that the minimum vision standard at play is fair and related to important and reasonable safety considerations.

The rules do make a distinction based on a physical disability, the province conceded, but said they do not specifically single out those with one eye, because even people with both eyes functional might not meet the standards.

Several experts testified, with one arguing for the province that statistics show the monocular have a higher risk of crashes. Di Cienzo's experts assessed her capable of driving safely. Other provinces do allow individual exceptions based on functional assessments.

Despite the victory, Di Cienzo will have to wait at least 12 months before potentially getting her licence back. Kimmel refused her request to exempt her from the hold she put on the ruling, saying a test first needs to be in place for Di Cienzo to show she can indeed drive safely.

Di Cienzo's lawyer, Neil Wilson, said the ruling would affect Class-C licensing, which covers all buses other than school buses.

“It's an important recognition of what she has always said: that she should be assessed on her actual ability to drive safely rather than on her disability,” Wilson said.

A similar case was unfolding in Belleville, Ont., he said, in which a client of his with albinism who used a “telescopic” lens to drive cars accident-free for 25 years lost his licence under changed rules.

Jenessa Crognali, a spokeswoman for Attorney General Doug Downey, said only that the vision standards are not discriminatory and, in any event, are justified to protect road safety.

This report by The Canadian Press was first published on July 23, 2020.