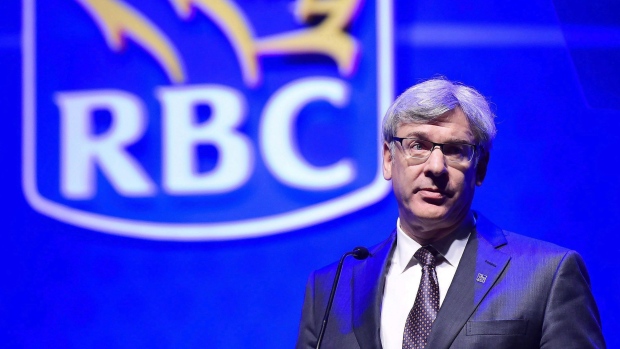 TORONTO - The head of Royal Bank of Canada says the COVID-19 pandemic has exposed a critical need for society to become more equitable, sustainable and prepared to handle future challenges.

“The forced pause in our busy and often over-programmed lives has allowed us to really see that we have not created the best society for everyone and therefore we have a responsibility and a sense of urgency to ensure a more inclusive, fairer, and sustainable future,” chief executive Dave McKay said Thursday.

He was speaking at the bank's annual general meeting, which was held virtually for the second year in a row because of the health crisis.

He used the meeting to urge Canadians “to improve the world for those that will inherit it” by addressing climate change, inequities that hold people back, the future of work and the digital economy.

He called climate change “an existential threat” and “the most pressing issue of our time.”

The bank received a shareholder proposal requesting it adopt company-wide, quantitative, time-bound targets for reducing greenhouse gas emissions, but 68 per cent those at the AGM voted against it.

However, McKay pledged that RBC would boost its sustainable financing target to $500 billion by 2025 and achieve net-zero emissions by 2050.

He also committed to ensuring Black, Indigenous or persons of colour will make up 40 per cent of the 1,400 students RBC will hire this summer.

The promise builds on a commitment RBC made to ensure members of these communities amount to at least 30 per cent of RBC's executive appointments.

In 2019, 1.3 per cent of RBC's employees based in Canada identified as Indigenous, while 37 per cent were minorities - defined by the bank as people who are non-Indigenous and non-Caucasian in race or non-white in colour.

Minorities made up 19 per cent of the bank's executives and 39 per cent of those in middle management or more senior jobs that year. By 2020, Black, Indigenous and people of colour made up 23 per cent executive appointments.

RBC acted as COVID-19 and George Floyd, a Black man who died in police custody in Minneapolis, put a spotlight on inequality.

“The pandemic exposed, and in some cases, widened inequities that hold people down and communities back,” said McKay. “Our society has a moral obligation and an economic imperative to bring everybody forward collectively and inclusively.”

He also said the country should focus on mental health and preparing people for a different future because the pandemic has transformed how and where we work and increased the need for new skills.

The pandemic, he said, has shown Canada needs investments in technology and talent as it grapples with a digital-first economy, changing consumer behaviours and the rewiring of our supply chains and services.

While McKay spent much of his speech calling for concerted efforts to improve society, he also offered a peek at how his bank handled the first year of the pandemic.

“It is the first time in my 35+ year career that I have seen our global clients all impacted at the same time,” he recalled.

The bank rushed to put aside $2.5 billion for potential credit losses, saw a 30 per cent drop in credit purchases and as interest rates lowered its net margins, watched about $1 billion in earnings be erased.

Staff, he said, fielded more than 22 million calls to contact centres and proactively reached out to 3.7 million personal and small business clients with reassurances and advice.

About 620,000 customers made use of RBC's client relief programs.

“While we are not through this pandemic yet, and continue to need far greater global progress on vaccinations and variant control, we do see much better days ahead and expect improving health outcomes will lead to a rapid rebound in global growth, spurred by significant pent up demand and consumer liquidity.”

This report by The Canadian Press was first published April, 8 2021.