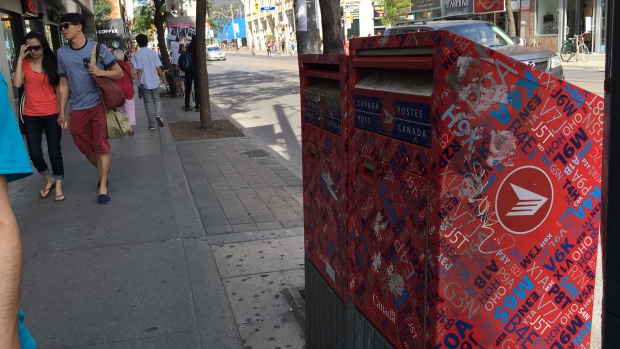 OTTAWA -- Canada Post says the latest offer it made to the Canadian Union of Postal Workers in the ongoing labour dispute is to be considered final.

In a statement issued on Monday, Canada Post says it still hopes to negotiate a deal with the union representing postal workers, but adds that the June 25 offers "represent a fair and reasonable framework for settlements."

The Crown corporation says the CUPW's demands are "not affordable" and would add $1 billion in costs over the contract term.

The union, meanwhile, is accusing Canada Post of preparing to lock workers out, and creating uncertainty by warning the public to avoid the post office.

CUPW says it has been showing up at the bargaining table with proposals to make the post office even more profitable and improve services for businesses and the public.

Neither Canada Post nor CUPW has served a 72-hour notice of intent to strike or lock out, but either can do so at any time.

Changes to employee pension plans have been a key sticking point in negotiations, but Canada Post said the offers contain no changes to the pension for all employees currently in the plan.

Canada Post said in the event of a full work disruption, it will not operate -- mail and parcels will not be delivered, and no new items will be accepted.

Spokesman Jon Hamilton said Canada Post has a memorandum of agreement with the union "where the federal socio-economic cheques will be delivered."

"In the event of a work disruption we would arrange ... delivery one day of the month," he said Monday.