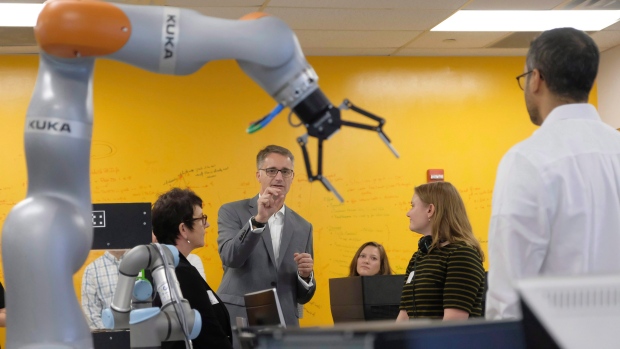 A Siemens R& D centre in Princeton, N.J. is shown on Monday, Sept. 17, 2018, in Princeton, N.J. Canada has the globe's fifth largest artificial intelligence workforce, but is still far from closing the gender gap in the sector, according to new rankings from the World Economic Forum. THE CANADIAN PRESS/AP-Charles Sykes/AP Images for Siemens

This is the second year Canada has placed 16th in the international organization's list, which measures economic, educational, health and political disparities experienced between men and women in more than 100 countries around the world.

Iceland, Norway, Sweden and Finland took the top spots, but Canada ranked above Latvia, Bulgaria, South Africa, Switzerland and dozens of other countries.

When it comes to wage equality, Canada ranked 50th, behind the U.S., Germany, Thailand, Uganda and the Ukraine.

The World Economic Forum says the global gender gap closed slightly this year, after widening for the first time in a decade last year.