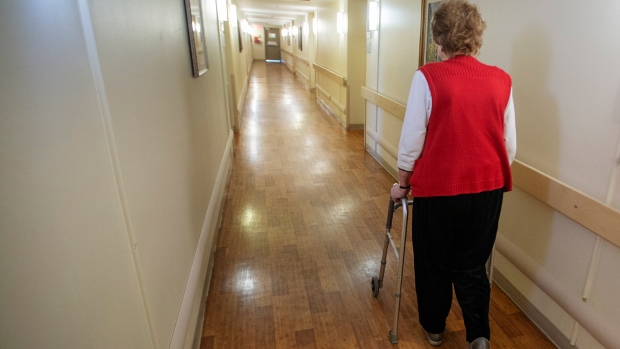 A resident walks down a hallway at a seniors' residence in Montreal, Thursday, Jan. 30, 2020. THE CANADIAN PRESS/Ryan Remiorz

News that the man in his 80s had died over the weekend coincided with assurances by various provinces that the well-being of nursing home residents was paramount.

Laura Tamblyn Watts, policy director at the National Initiative for Care of the Elderly (NICE), welcomed additional precautions but was wary of restrictions that “can be just as damaging” to a population prone to social isolation.

“It is such a vulnerable population to many forms of illness but in particular this COVID-19,” acknowledged Tamblyn Watts.

“We will certainly see increased protocols, I think across the board, for long-term care. The challenge, however, is when you have older people who are at risk of social isolation - it's very upsetting for them to be in isolation in many instances. And if you have people with cognitive impairment, they may not understand why no one is coming to visit them.”

Ontario's health ministry said Monday it was introducing “active surveillance,” meaning staff, volunteers, visitors and residents who may come and go would be checked for symptoms and asked about travel history.

Chief medical officer of health Dr. David Williams said the province has also begun COVID-19 testing on samples from long-term care homes where there is any respiratory outbreak.

He stressed that the advice to the general public about frequent hand washing and other protections isn't just about people protecting themselves, but protecting the most vulnerable residents.

“By being vigilant, by keeping at that, you can protect them.”

In Nova Scotia, the province's chief medical officer of health drew attention to new national screening protocols for the novel coronavirus and stressed that those who travel out-of-country monitor themselves for two weeks.

Dr. Robert Strang also announced that nursing home visitors who have travelled outside the country in the last 14 days would not be allowed entry, a measure the president of the Nova Scotia Nurses' Union doubted could be monitored or enforced.

“I wouldn't see that as the role of the nursing staff,” says Janet Hazelton, who instead called for guidance on what to do if a resident contracts COVID-19.

There are currently no confirmed cases of COVID-19 in Nova Scotia.

“We want to have enhanced screening of visitors who are coming in and out of long-term care (homes) so if you are going to visit someone don't go with a large group, go one by one. Only go to visit the person you are there to see. If you have any concerns about respiratory illnesses stay away.”

-- With files from Allison Jones in Toronto, Keith Doucette in Halifax, and Camille Bains in Vancouver.