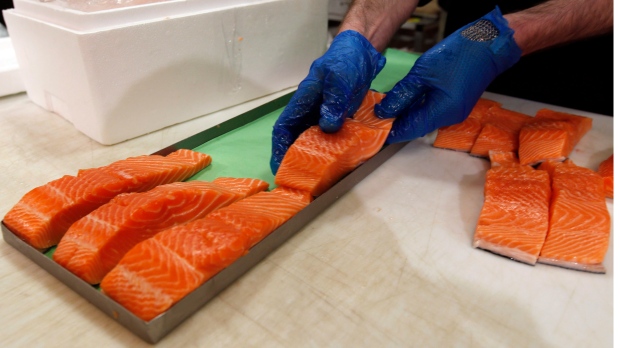 HALIFAX -- Environmental groups are giving Canada's seafood labelling requirements an F grade due to their lack of details compared to American and European packaging standards.

The report card released Thursday said Canada has the vaguest labelling descriptions of fish products of the three jurisdictions. It said that is increasing the risk of misrepresentation of what's being sold.

Colleen Turlo, a spokeswoman from the Halifax-based Ecology Action Centre and co-author of the study, says basics like the species' scientific name, along with how and where the fish was caught and processed should be on the labels.

The report, by a coalition of environmental groups called SeaChoice, says some seafood sellers and retailers are voluntarily labelling seafood more comprehensively, but the lack of uniform regulatory requirements means that only some consumers have the information they need.

Turlo argues that Canada should at least match American and European standards.

"It's that first step to ensuring that as a product travels through the supply chain ... information about that product isn't changed along the way," she said.

She says in Canada it's possible that consumers won't have any idea, based on the label, what country the fish actually comes from and whether it was farmed or wild.

"Those are some pieces of information that can help narrow down whether something is overfished and whether the region has strong fisheries management," she says.

"It's shocking that our products from Canada are being sold with more detail in the United States and the European Union than they are in Canada," said Turlo.

The study says improvements in labelling requirements in other jurisdictions have been driven by the results of genetic testing of seafood that exposed extensive fraud, where seafood labelled as one species turns out to be an entirely different kind of fish.

While there are certification programs that collect information from participating Canadian companies and provide a label indicating the species is harvested sustainably, Turlo said national standards are needed.

"They're collecting information and data that we feel the Canadian government should be collecting anyway ... Consumers should be able to see this without having to rely on a third-party certification," said Turlo.

The Canadian Food Inspection Agency has authority over food labelling and says on its website that labels should provide a common name, the quantity, the best before date and the name and address of the manufacturer, dealer or importer "and in some cases, grade/quality and country of origin."

The agency did not immediately comment on the study's proposals.