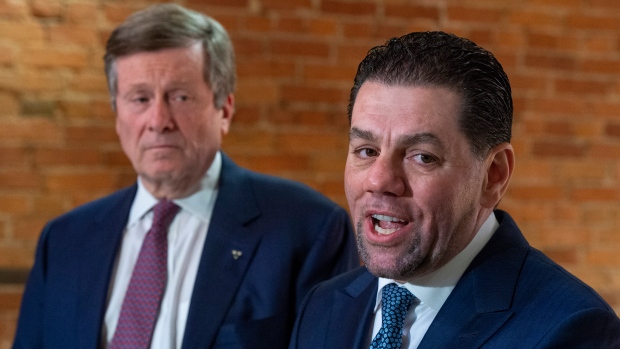 A Toronto businessman has launched a national campaign to raise money for the families of the 57 Canadians who were killed when their plane was mistakenly shot down in Iranian airspace last week.

Paramount Fine Foods CEO Mohamad Fakih announced the creation of the ‘Canada Strong’ fund at a press conference on Monday morning, saying that it is up to everyone to ensure that families struggling with the loss of a love one in the tragedy “feel Canada’s embrace.”

“The Canadians aboard Flight 752 were our neighbours, our coworkers but most importantly our fellow Canadians,” he said. “They leave behind children, spouses, colleagues and friends who need your support during this life-altering period. If there was ever a time for all of us to come together and support one another that time is now. Regardless of race, religion or background, we are all Canadians and we have that in common.”

Fakih said that he will personally donate $30,000 to the fund and cover any administrative expenses so that all future donations go directly to the family of victims.

The fund itself, he said, will be overseen by the Toronto Community Foundation, which was also responsible for the “TorontoStrong” fund that raised millions for families of victims in the Yonge Street Van attack and Danforth Avenue shooting.

“I am calling on all Canadians in this moment of needs, including corporate leaders and businesses across the country, to support these families with these unexpected expenses that have tragically fallen upon them,” Fakih said. “I know that this community, the Iranian community, are sometimes too proud to accept financial help. But you are not accepting any help from strangers. We are one big family, the Canadian family.”

Fakih said that he hopes that $1.5 million can be raised through the fund.

He said that he envisions some of that money going to families to cover the cost of funerals and other expenses, though officials with the Toronto Community Foundation will ultimately have the final say on how to best distribute it.

The hope, Fakih said, is that the establishment of the fund results in a nationwide effort “that brings people together” amid an immense tragedy.

“I am a very positive person, I find a reason to smile every day but it has been difficult for me to find a way to smile for the last four or five days,” he said. “Hopefully this brings us together and reminds us that we really need to stick together.”

Dozens of GTA residents were among victims in crash

The victims in the crash of Ukrainian Airlines Flight 752 included dozens of people from the Greater Toronto Area, including a large number of university students.

Speaking with reporters at Monday’s announcement, Mayor John Tory said that the loss is immeasurable.

He said that while attending several vigils over the weekend he was “struck by the range of accomplishment and ambition” of some of the victims but also the sheer number of “children and other young people” who were lost.

“I hope that Canadians, individuals and corporations, will see it in their hearts to contribute big or small. Every contribution counts, every contribution is a tangible demonstration to the families of the victims of just how much in solidarity with them we are,” he said.