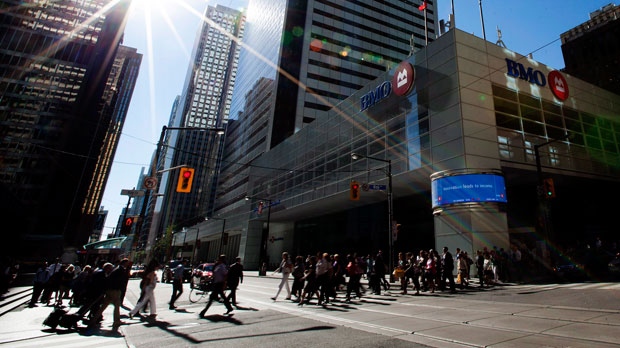 People pass by the Bank of Montreal in Toronto on Tuesday, Aug. 28, 2012. (The Canadian Press/Michelle Siu)

TORONTO - A new poll suggests more Canadians are in debt this year and taking longer to settle their accounts.

According to a Bank of Montreal study, 83 per cent of Canadians surveyed admit to being in some form of debt -- an increase from 74 per cent a year earlier.

But the poll also found the average amount of monthly debt repayment is down 13 per cent to $986 from a national average of $1,138.

Albertans had the highest amount of debt payments each month at $1,225, while Quebecers reported the least amount at $768.

The largest source of debt cited by those surveyed was a mortgage, at 34 per cent, followed by car payments at 19 per cent and student loans at 14 per cent.

The poll also found that nearly half of those surveyed said their household debt has shrunk in the past five years, compared with 28 per cent who said it grew during that period.

More than half said they plan on being debt-free within five years.

The online poll done by Pollara surveyed just over one-thousand people in mid-July.