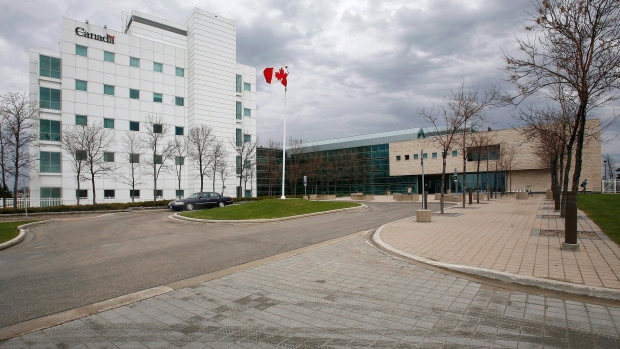 The National Microbiology Laboratory is shown in Winnipeg on May 19, 2009. The University of Manitoba has cut ties with a researcher who helped develop the Ebola vaccine while she is being investigated by the RCMP.A spokesperson says Dr. Xiangguo Qiu and her husband, Keding Cheng, have both had their non-salaried adjunct appointment at the university severed pending the investigation.THE CANADIAN PRESS/John Woods

Ontario’s count of known examples of the B.1.617 coronavirus variant grew nearly six times in the span of a week in May, and officials say they are still a “few weeks” away from being able to disclose new findings publicly in real time.

From May 12 to May 19, Public Health Ontario (PHO) said the number of known positive cases of the B.1.617 coronavirus variant grew from 45 to 260. It is almost certainly even higher today.

“The vast majority of these samples (203) were detected via the federal government’s airport and land border screening program and the National Microbiology Lab in Winnipeg and were travel-related,” a spokesperson told CP24. “The remaining 57 were detected through PHO’s genomic sequencing program, with the majority linked to travel.”

Follow-up investigations to determine origin where cases couldn't immediately be tied to travel were underway in “a few” instances but PHO would not provide an exact number.

Since May 19, labs have detected another 62 examples of B.1.617, Chief Medical Officer of Health Dr. David Williams said Thursday, bringing the total found to date to 322.

The B.1.617 coronavirus variant and two of its subtypes were first discovered in India and are to blame for a disastrous rise in transmission that has led to tens of thousands of deaths and a near complete collapse of the healthcare system.

The World Health Organization first declared it a global variant of concern on May 10 and preliminary data out of England suggests it is at least as infectious as the B.1.1.7 variant currently dominant in Ontario, if not more.

PHO manages a widespread screening program for three variants of concern: B.1.1.7, P.1 and B.1.353, using modified analysis of PCR positive samples that flags cases with a very high probability of being a variant of concern.

So far, PHO has opted not to use the same mechanism to detect B.1.617, instead opting for greater use of whole genomic sequencing, where the entire DNA of the sample virus is painstakingly mapped out in a laboratory.

Ontario officials say they are working to be able to sequence up to 2,000 samples per week, but Ontario was still generating a weekly average of 11,354 cases as of May 26.

Williams said there simply is no easy way to screen for B.1.617 using modified PCR testing, as was developed for earlier variants of concern.

“We’re not able to do that so far. We’ll continue to see if there is any more rapid screening process that is available,” he asid.

Growth of the B.1.1.7 variant, which represents the majority of all positive cases in Ontario, was 13 per cent.

PHO said on May 13 they would be developing a process to regularly report B.1.617 discoveries “in a week or two.”

On May 26, they said it would be another “few weeks,” before they could start regular reports about new B.1.617 cases.

The discovery of the B.1.617 variant prompted the federal government to block all direct flights from India and Pakistan until at least June 21.