Ceremony held to mark year since arrest of Bruce McArthur 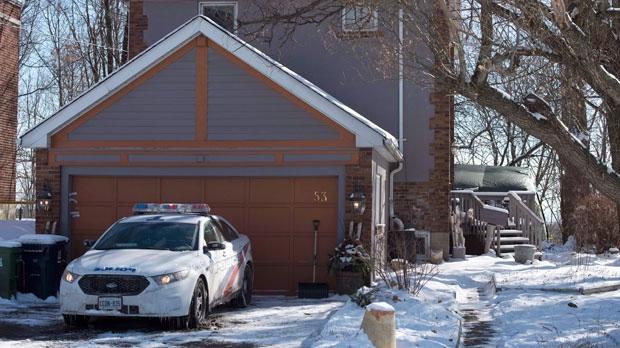 Police stand guard at a house on Mallory Crescent in Toronto on Tuesday, January 30, 2018. Police are investigating the property in relation to the murder charges laid against Bruce McArthur. THE CANADIAN PRESS/Frank Gunn

One year after the arrest of alleged serial killer Bruce McArthur, a somber ceremony was held at the home where the remains of his alleged victims were uncovered.

He was charged that day with two counts of first-degree murder but the allegations against him soon amassed, as forensic investigators descended on a midtown Toronto home.

It was there, on a property on Mallory Crescent belonging to Karen Fraser and Ron Smith, that police later discovered the dismembered remains of eight men.

McArthur, a longtime landscaper, had been known to do work at the home and store his tools there.

In hindsight, Insp. Hank Idsinga, the lead investigator on the case, said the series of events still amaze him.

“The thought that goes through my mind now – we effected that arrest and yet we hadn’t recovered any of the [alleged] victim’s remains at that point in time,” he said.

“We didn’t know where the victim’s remains were… Then it very quickly evolved from there.”

McArthur was eventually charged with six additional counts of first-degree murder, bringing the total number of murder charges against him to eight.

At 10:25 a.m.on Friday, the sound of a lone bagpiper broke through the quiet crowd that gathered outside the Mallory Crescent property. It was at that time, exactly one year ago, that police arrived at Fraser and Smith’s home and told them they had to leave.

It would be months before the couple would be allowed to return.

Playing a traditional lament – a song to express grief – the piper performed as he walked through the property, stopping in front of the garage.

The homeowners repainted the garage doorthis past fall, after police officially wrapped up their lengthy investigation there.

In curly grey-blue font, song lyrics from Nothing More by the Alternate Routes have been painted there: ‘We are One. We are how we treat each other when the day is done.’

The homeowners decided they would not speak to the media at the ceremony, however, in an email for the commemoration they pointed to the bagpiper as their voice.

“For crimes that are beyond words there will be no words from us on January 18th,” the homeowners wrote in an email. “The plaintive skirl of the pipe will speak for us.”

Reverend Deana Dudley of The Metropolitan Community Church said she showed up to the ceremony to show the homeowners and community support.

“We’re just here to remember. To remember the good men lost and honour them. You know, it’s been a year and it’s still fresh in people’s minds. For some folks this is still very raw. I expect we will still be feeling a little raw on the tenth anniversary,” she said.

Most of the eight men allegedly killed by Bruce McArthur had ties to Toronto’s Gay Village and had been reported missing.

Years before police arrested McArthur, speculation was mounting about a serial killer lurking in the LGBTQ community.

In 2012, police launched a taskforce to look into missing persons cases linked to the neighbourhood, but it dissipated after no criminal evidence was found. A secondtaskforce, Project Prism, was launched in 2017 and looked into the disappearance of two other men.

During this time, some in the LGBTQ community felt their concerns about the missing men weren’t being taken seriously by police. The criticism intensified in late December 2017, when Toronto Police Chief Mark Saunders told the public that investigators had no evidence to suggest a serial killer was operating in the Gay Village.

Though he stands by Saunders’ comments that day, Idsinga acknowledged that the relationship between police and the LGBTQ community took a toll.

He said it was a hard lesson police learned, but one that he believes has helped improve policing in the city.

He pointed to the establishment of a centralized missing persons unit as an example of how the case brought forth change.

“The officers who have been setting that up and have gotten that up off the ground as of July in 2018 have done some great work,” Idsinga said.

“The McArthur case itself in a rather roundabout way has actually strengthened a lot of the ties between the police services and the LGBTQ community. Personally I’ve developed some relationships that I haven’t had before and the lines of communication are certainly more open now than they were before, but that too is still evolving.”

Looking thinner, McArthur appeared briefly before a judge on Wednesday where another date was set for continuing pre-trial hearings.

He is set to stand trial in January 2020. He waived his right to a preliminary hearing late last year.

None of the allegations has been proven in court.

Idsinga said investigators continue to take a “very hard look” at missing persons cases preceding 2010, but have yet to find evidence linking McArthur to those investigations.

“We’re almost done that review,” he said. “Hopefully we just have the eight alleged victims and it will stay at eight.”