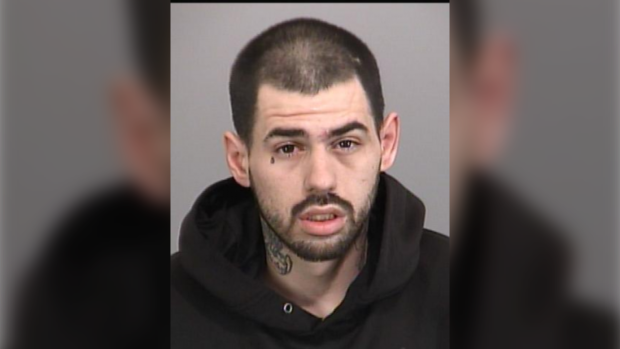 Jason Long, 27, is seen in this undated photograph provided by police.

A 27-year-old man has been taken into custody in connection with an attempted murder and robbery in Hamilton, Ont. earlier this month.

The incident occurred around 11 p.m. on Feb. 10 near Main and Burris streets.

According to police, a 30-year-old man was invited inside the residence of an acquaintance and was “viciously attacked” by assailants.

“Another individual attended the residence as the beating was taking place and attempted to intervene, but he was unable to assist,” police said in a news release issued at the time.

Investigators said that when officers arrived at the scene, one of the assailants jumped out of a window to escape.

The victim was rushed to hospital with life-threatening injuries. On Tuesday, police said the man is “still on life support and his prognosis is not favourable.”

A 33-year-old woman, who police say was a resident from the apartment, was arrested on Feb. 11 in connection with the incident.

On Tuesday, police confirmed that Long had been taken into custody following an interaction with police. A third person was also arrested for accessory after the fact to attempted murder, investigators added.

BREAKING -In the area of Barton/Westinghouse after an interaction with police, 27-y/o Jason LONG has been arrested. A female has also been arrested for Accessory After The Fact to Attempt Murder. Will appear in court tomorrow.
Additional info will be released tomorrow. #HamOnt https://t.co/CjMGhXy3qh

Police did not release any further details about the arrests, saying only that more details will be available Wednesday.

Investigators have said that if the victim succumbs to his injuries, the current charges against Peternel and Long will be amended.