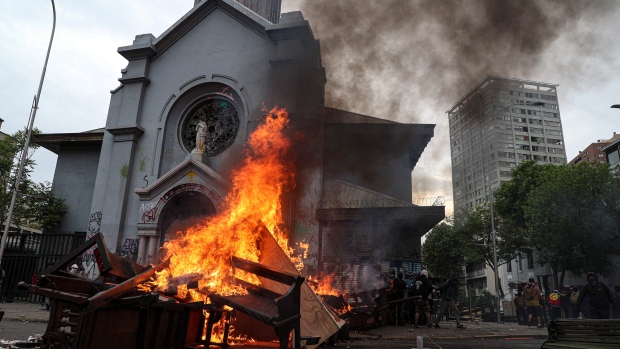 Items removed from a church by anti-government protesters go up in flames in a barricade built by the protesters, in Santiago, Chile, Friday, Nov. 8, 2019. Hooded protesters removed furniture and religious items from the church and set them on fire near the main gathering site of massive demonstrations in the capital over inequality. (AP Photo/Esteban Felix)

SANTIAGO, Chile - Chile is entering its 26th day of protest against social inequality with huge demonstrations across the country and a national strike.

Thousands of people were marching peacefully in Santiago on Tuesday, waving the flags of Chile and the Mapuche indigenous group as whistles and music rose in the air.

The coastal city of Valparaiso has been brought to a standstill, with government offices and public and private transport shut down. Protesters threw rocks at some shops in the morning, prompting many to remain closed.

Large demonstrations also emerged to the south, in Concepcion. In Antofagasta, in the north, barricades impeded traffic.

A student protest over rising subway fares has morphed into a broad movement demanding reforms to education, health care, pensions and a new constitution.