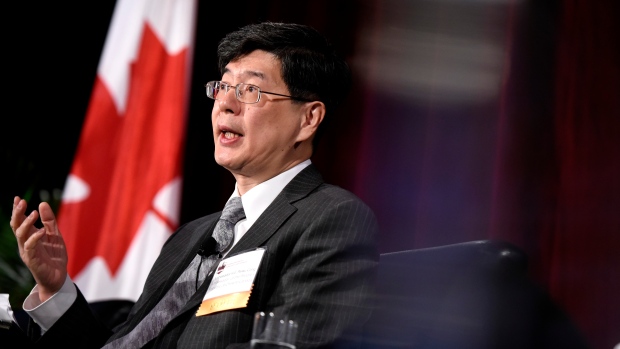 Ambassador of China to Canada Cong Peiwu speaks as part of a panel at the Ottawa Conference on Security and Defence in Ottawa, on Wednesday, March 4, 2020. THE CANADIAN PRESS/Justin Tang

OTTAWA - China's ambassador to Canada says Michael Kovrig and Michael Spavor confessed to crimes before their release from his country's prisons this past September.

Canada delayed its decision on 5G out of concern for Kovrig and Spavor who were imprisoned in China for nearly three years in apparent retaliation for the RCMP's arrest of Huawei executive of Meng Wanzhou on an American extradition warrant in December 2018.

China convicted Kovrig and Spavor of espionage in closed trials that were widely criticized by Canada and dozens of Western allies who rejected the charges against the men as trumped-up retaliation.

“The information reviewed by Chinese authorities shows that the evidence of the crimes is indisputable. And also, they have confessed to their crimes,” Cong said Friday to a small group of Canadian and Chinese reporters in an invitation-only video news conference.

A Chinese state-controlled newspaper, citing anonymous sources, first reported shortly after their release in September that the two men confessed, and also said they had been released on bail for medical reasons and had to “strictly abide” by conditions.

The initial report in the Global Times newspaper, widely viewed as an organ of the Chinese Communist Party, provided no further details.

“The two Canadians should strictly abide by the decision on bail made by relevant Chinese courts. In case of violation, China can resume, in accordance with law, the trial of the alleged criminal acts any time while on bail,” Cong said Friday when pressed for further details by The Canadian Press.

Cong was responding to remarks by Foreign Affairs Minister Melanie Joly, who revived speculation about the matter during an interview with CBC's “Power and Politics” on Wednesday.

“We want to make sure to continue to advocate their case, because there are certain issues that have not been settled yet,” Joly told the news program after meeting with Kovrig and Spavor.

When pressed by her interviewer to elaborate on the issues, she replied: “The two Michaels are on bail right now, according to the criminal law in China. And, so we want to make sure that we work that out with the Chinese government. It will be a priority.”

Global Affairs Canada did not directly address Cong's claim of a confession, but reiterated the government's long-held position in a written statement: “As Canada has always maintained, Mr. Kovrig and Mr. Spavor were detained arbitrarily for political leverage and Canada has repeatedly expressed concerns regarding the arbitrary nature of the whole process.”

Joly was in Liverpool, England, for a G7 foreign ministers' meeting, where China's military provocations in the South China Sea and against Taiwan were to be discussed.

Cong said China wants to move forward with a positive relationship with Canada, noting that their trade volume has risen despite the decline in diplomatic relations over the three years since the onset of the Meng-two Michaels affair.

He dismissed Canada's decision this week to join a diplomatic boycott of the February Winter Olympics as political posturing that would not diminish the spectacle of sport that Beijing would be hosting.

In announcing the boycott. Prime Minister Justin Trudeau cited extensive human rights abuses by China, as did several western allies such as the United States, Britain and Australia that include crimes against its Muslim Uyghur population, Hong Kong's pro-democracy movement and military provocations towards Taiwan.

The Trudeau Liberals are expected to announce a decision soon on Huawei participation in its next-generation 5G internet network, and Cong made clear China will take a dim view of Canada if it follows its intelligence-sharing allies in the Five Eyes.

“We hope that it will be a positive momentum for the relationship, rather than those negative things that will be detrimental to the relationship. Of course, they will pay a price for their erroneous deeds and actions,” said Cong.

Experts say Canada should expect economic retaliation from China following the Olympic boycott and the likely decision to exclude Huawei from its 5G internet network.

“I suspect we will get punished for the eventual decision on Huawei rather than the Olympics,” said Guy Saint-Jacques, a former Canadian ambassador to China.

After Canada arrested Meng, China blocked imports of Canadian beef and pork, as well as canola.

“This time, they could choose a product that they can get elsewhere: barley? wheat? canola? pork? beef? iron ore?” said Saint-Jacques.

Bessma Momani, an international affairs expert at the University of Waterloo, said President Xi Jinping could also take action to curtail Chinese investment in Canada in a variety of sectors, including the housing market.

“Much of China's investments in Canada has gone into energy that China craves, but too much has also gone into real estate as a way for Chinese elite to funnel money outside of the country,” said Momani.

“This latter investment could be curtailed further as a Chinese countermeasure, but which may not be a bad thing for homeowners seeing skyrocketing prices.”

Momani said even though cutting the flow of Chinese investment in Canadian real estate could drive down prices and make homes affordable to more Canadians, Xi still has a strong incentive to do that anyway.

“This would kind of damage the Hong Kong independence momentum.”