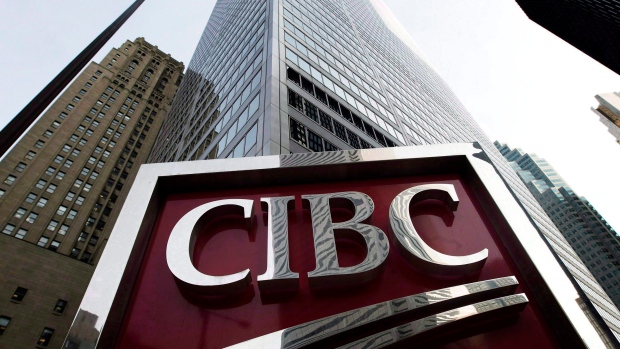 A CIBC sign in is shown in Toronto's financial district Feb. 26, 2009. (The Canadian Press/Nathan Denette)

TORONTO - The Canadian Imperial Bank Of Commerce hiked its dividend and reported a two per cent rise in its third-quarter net income as growth in Canadian personal and small business banking was offset by weaker capital markets earnings.

The Toronto-based bank said Thursday it will now pay a quarterly dividend of $1.44 per share, up four cents.

CIBC reported net income of $1.4 billion for the quarter ended July 31, compared with $1.37 billion during the same period a year ago.

The lender said it earned $3.06 per diluted share for the quarter ended July 31 compared with $3.01 a year ago.

On an adjusted basis, CIBC earned $3.10 per diluted share for the quarter, compared with an adjusted profit of $3.08 during the same quarter in 2018.

Analysts on average had expected earnings of $3.06 per share for the quarter, according to the financial markets data firm Refinitiv.

The bank's latest earnings were also impacted by certain items which resulted in a negative impact of four cents per share. The charges included $27 million in amortization of acquisition related intangible assets and $6 million in purchase accounting adjustments net of transaction and integration-related costs associated with the acquisitions of The PrivateBank and Geneva Advisors.

“In the third quarter, we delivered solid results through the continued execution of our client-focused strategy,” CIBC chief executive Victor Dodig said in a statement.

CIBC's Canadian personal and small business banking unit reported net income of $657 million, up $18 million or three per cent from the prior year as higher revenue was partially offset by an increase in expenses and provision for credit losses, or money set aside for bad loans.

Its Canadian commercial banking and wealth management arm saw net income drop by one per cent, or $2 million, to $348 million during its third quarter. The division's revenue rose on volume growth, higher fees and higher assets under management but this was offset by a higher provision for credit losses as well as higher non-interest expenses.

U.S. commercial banking and wealth management, meanwhile, reported a six per cent or $10 million jump in net income to $172 million for the quarter, primarily due to higher revenue but offset by a rise in expenses and provision for credit losses.

Capital markets, however, reported a 13 per cent or $34 million drop in third-quarter net income to $231 million, primarily due to a higher provision for credit losses, CIBC said.

Total provision for credit losses amounted to $291 million, up from $241 million during the third quarter of 2018.

CIBC also announced Thursday that chief financial officer Kevin Glass will be retiring after 10 years with the bank, effective Jan. 1. He will serve as CFO until Oct. 31, and stay on as a special adviser until his retirement.

Companies in this story: (TSX:CM)