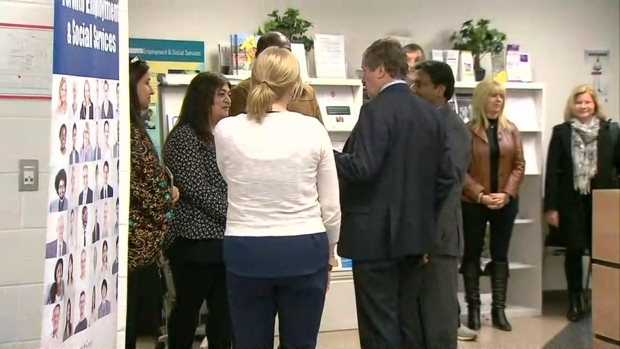 Mayor John Tory speaks with workers at the Rexdale Community Hub on Tuesday.

The city has unveiled plans for a series of job fairs as it steps up its efforts to reduce a youth unemployment rate that hovers around 20 per cent.

Mayor John Tory made the announcement at the Rexdale Community Hub on Tuesday morning, noting that the job fairs will be focused on helping young people between the ages of 16 and 29.

“Youth unemployment still stands at 20 per cent and in areas of the city where people are struggling and a bit more isolated it can be even higher,” he said. “We simply cannot accept that such a large number of people will be left in a position where they are on their own and that is why the city is stepping up.”

Tory said that youth unemployment is a significant problem for the city because it affects a group of people that are key to the “continued prosperity” of the city.

He said that the goal of the job fairs is to connect young people who may reside in areas that are a “little more removed” from the downtown core with the same opportunities that residents in the downtown core have.

One of the job fairs is being put on in conjunction with the Retail Council of Canada while another has been organized in partnership with the Ministry of Children and Youth Services. Tory said that particular job fair will be partly focused on helping young people who have been engaged with the criminal justice system find work.

“I am issuing a challenge to employers across Toronto. I am calling on employers to join our job fairs. The more employers we have sitting behind those table the more opportunities there will be for young people, talented and ambitious young people, who may come from places where they may not have had access to those employers,” Tory said.

The job fairs will be held at the following locations: