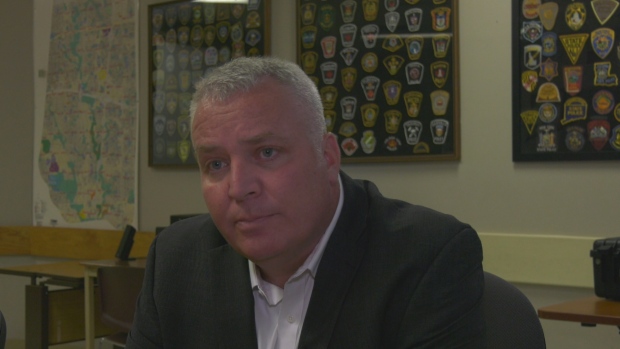 Insp. Joe Matthews, who is the head of the Gun and Gang Task Force, speaks with CTV News Toronto on Wednesday.

The head of the Toronto Police’s Gun and Gang Task Force says that the city is in the midst of a “street gang turf war” with around 100 different groups believed to be active.

Inspector Joseph Matthews, who took over control of the unit in January, made the comment during a exclusive one-on-one interview with CTV News Toronto's Tracy Tong on Wednesday.

He said that officers “are doing the best they can to get guns off the street and get gangsters off the street” but have noticed an uptick in the brazenness of gang violence so far this summer.

“It is definitely a street gang turf war that is going on. There is lot more brazenness in the gangsters with daytime shootings that we typically haven’t seen,” he said. “It really creates a tremendous amount of concern for us with a number of innocent civilians walking around that time of day subject to the bullets that are going flying.”

More than 400 shooting victims so far this year

There have been a total of 412 people shot in 274 occurrences across this city so far in 2019, with both of those numbers representing a five-year high.

Matthews said that police are aware of “hundreds” of gangs that are operating in the city and are believed to be responsible for most of the violence. But police still need to build cases to apprehend those gang members.

Matthews said that police have seized about 450 crime guns so far this year, including 56 since Canada Day.

About three-quarters of those guns, he said, came from the U.S., a number which is roughly in line with previous years.

Matthews, however, said that police have seen an increase in the number of guns that they have seized which have been modified with aftermarket devices to become semi-automatic.

“There are more guns on the street than there ever have been but we are continuing to be diligent and work in our vulnerable neighbourhoods to get guns off the street,” he said.

Earlier this month, all three levels of government provided the TPS with $4.5 million in additional funding to tackle the rise in gun violence.

Police Chief Mark Saunders has said that much of that money will go towards a 10-week initiative that will deploy additional officers across the city under the command of Matthews’ Integrated Gun and Gang Task Force. The officers will be involved in everything from bail compliance monitoring, to community engagement and intelligence-led policing.

“We are trying to approach it from all angles and I am quite confident that we are going to be able to make an impact,” Matthews said.