City needs more help as it stares down $1.5B shortfall in 2021 and Tory says federal response has been disappointing so far 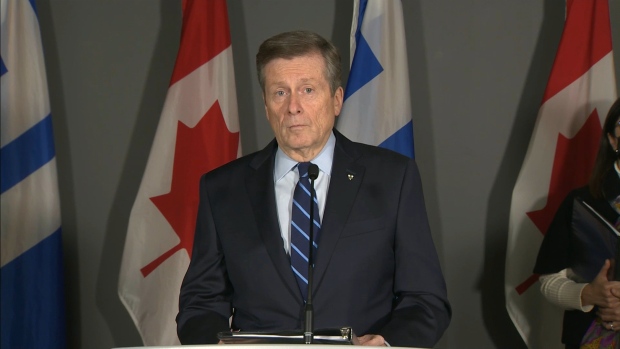 Mayor John Tory says that the response to the city’s request for provincial and federal funding to help cover an expected $1.5 billion shortfall in its 2021 budget due to the COVID-19 pandemic has been disappointing.

Toronto’s losses to date have been partly covered through $668.6 million in funding that it received from the federal government’s $19 billion Safe Restart Agreement to bail out Canadian municipalities.

Perhaps more importantly he said that it also remains unclear how much, if any funding, will be available should the financial impacts from COVID-19 continue into this spring and summer.

“I will be honest with you the response to that so far has not been to my liking in the context that neither government has committed to having a restart 2.0 which will apply to some of the shortfalls we are going to experience in 2021, transit shortfalls just as an example,” Tory told reporters at city hall on Thursday, as his executive committee met to consider the rate-supported budgets for 2021.

Transit ridership dipped by more than 85 per cent of the outset of the pandemic, costing the TTC hundreds of millions of dollars in lost revenue.

While ridership has since returned to 31 per cent of its pre-pandemic levels the TTC has warned that it likely won’t exceed 50 per cent until “mass vaccinations begin,” something that could still be months away.

That has led to complications as the city plans its 2021 budget, which is scheduled to go before council for final approval in February.

On Thursday morning, Tory’s office released a letter that he sent to Prime Minister Justin Trudeau and Premier Doug Ford ahead of a First Minister’s meeting planned for later today.

In it, he thanked Trudeau and Ford for their “ongoing efforts to ensure municipalities across Canada have had the support they need” but said that conversations need to begin now on what he called a “Safe Restart 2.0 program.”

“As we look ahead to 2021, it is clear that both our revenue shortfalls and additional expenditures to support vulnerable communities are likely to continue, for at least part of the year – though depending on the course the pandemic takes, the shortfall should be less than in 2020,” he said. “Given this, I am writing to request that at your meeting today you agree to again convene discussions between your governments regarding municipal operating budget support for cities, as part of a potential Safe Restart 2.0 program for 2021. This will allow us to continue managing through the pandemic, while delivering the high quality services our residents require, when they need them most.”