City of Toronto extends masking bylaw until at least April 2022 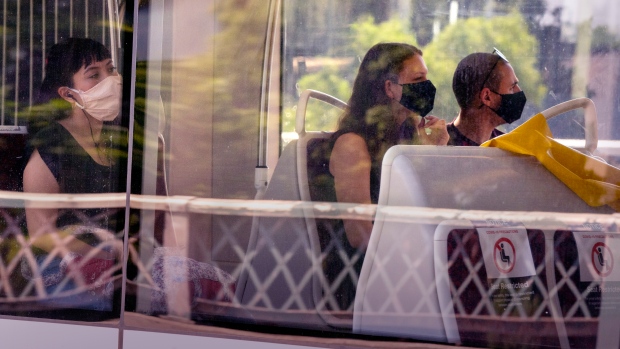 Toronto Transit Commission riders wear masks as they ride a streetcar in Toronto on Thursday, July 2, 2020. THE CANADIAN PRESS/Frank Gunn

Toronto city council has now extended all COVID-19 bylaws, including mandatory masking inside businesses and in common areas of apartments and condos, until at least April of 2022.

The recommendation, which was made by the city's acting medical officer of health, Dr. Na-Koshie Lamptey, was approved by councillors at Wednesday's meeting.

"COVID-19 cases and hospitalizations have increased in recent weeks with the onset of colder weather and as more people gather indoors. Modelling from the Ontario's Science Advisory Modelling Consensus Tables on December 7 indicated that cases and intensive care unit (ICU) admissions are expected to continue to rise through December and January, putting additional strain on the health care system," a news release issued by the city read.

"Public health experts have also expressed concern that there is potential for the Omicron variant to rapidly overtake the Delta variant, which up until recently, had been the dominant variant circulating in the community."

Toronto's top public health official said the extension of the bylaws is temporary and will be assessed on a monthly basis.

“We introduced the mandatory mask bylaw based on the recommendation of Toronto Public Health to help combat COVID-19. Now as we confront the Omicron variant, we know from public health officials that making sure we are wearing our masks when around others indoors is even more important," Mayor John Tory said in a written statement.

Ontario recorded more than 1,800 new COVID-19 infections today, including 343 in Toronto. That is the highest daily case count recorded in the province in more than six months.

Back in October, the province released a timeline for when all public health restrictions would be lifted, and in that document, officials marked March 28 as the anticipated date for the removal of masking mandates. While the province has halted easing additional restrictions following the recent spike in infections, officials have not said if the Ford government still plans to lift masking measures in the spring.