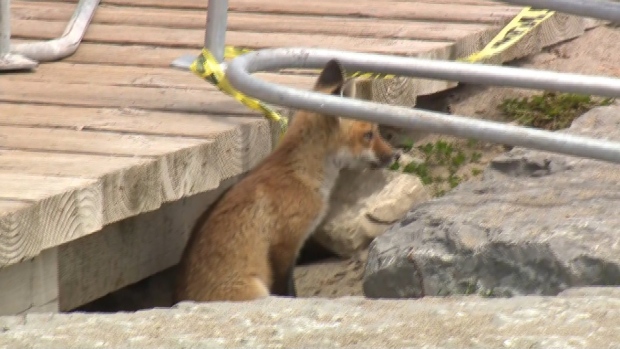 The city will be erecting more barricades at Woodbine Beach today as it ramps up its efforts to keep people from getting too close to a family of foxes that are living underneath the boardwalk.

Officials have been warning members of public to stay away from the wild animals since they were first spotted on the boardwalk more than two weeks ago, though many have ignored that advice.

On Wednesday morning, CP24’s cameras captured dozens of people watching the foxes from behind a fence that had been set up along the boardwalk, including at one point a crowd of seven different people armed with cameras.

“Will be acting on that today and we will be trying to act on the sort of small crowd scenes because you don’t want a small crowd scene to turn into a big crowd scene,” Mayor John Tory told CP24 after viewing the footage. “I find it the most difficult part of this job I have had in six years to be sort of a killjoy telling people not to go down to see something that is very cute and that we don’t have often in a big city. But it is not good for that wildlife and it is not consistent with what we are trying to do with this virus to have a crowd scene and to have people very close to those foxes.”

Officials with the Toronto Wildlife Centre have previously said that individuals have been spotted hand-feeding the baby foxes and taking photos in close proximity to the animals.

The centre has warned that the activity puts the foxes at risk by potentially getting them use to humans.

“It is so critically important for people to stay away from this fox family. These little young foxes are at a critical point in their development right and if they get used to people and if they don’t mind people and grow up thinking people are good that is literally life-threatening as they become adult foxes. It very likely would end up killing them,” Toronto Wildlife Centre Executive Director Nathalie Karvonen said earlier this week.

Tory said that the city is taking a “common sense approach” to the issue with people heading to the beaches to see the foxes and are just asking that they “be sensible.”

“We will deal with it today as much as we can and will try to do it in a very even-handed educational way which is what we try to do with everything,” he said.