CNE cancelled due to COVID-19 pandemic

The Canadian National Exhibition, known locally as the CNE and "The Ex", has announced the cancellation of this year’s event amid the COVID-19 crisis.

The summer favourite for Torontonians young and old has only ever been cancelled once before in its 142-year history.

“Safety always comes first at the CNE, and the decision to cancel our event is the right decision during this critical time to protect the health of all Canadians,” Canadian National Exhibition Association (CNEA) President John Kiru said in a news release issued Tuesday.

“Summer in Toronto will not be the same without the sights and sounds of the CNE, alongside so many annual festivals and cultural events that have been forced to cancel.”

The 18-day event, which takes place at Toronto’s Exhibition Place, was supposed to run from August 21 to September 7.

The first cancellation was a result of the Second World War.

Ontario Premier Doug Ford commented on the announcement at a news conference on Tuesday saying he was going to miss the annual tradition.

“It’s one of those things that you make sure you go every year since I can ever remember so it’s really going to be missed, especially to the kids who have been going there for years,” Ford said.

“Especially our age group, the baby boomers, we all grew up there. Those were the days where remember you would hop on the bus and go to the Dufferin Gates and get off with a bunch of friends.”

The CNEA says that the board of directors consulted with both provincial and municipal governments before voting in favour of cancelling the event on May 7.

The CNE is one of largest fairs in North America and sees more than 1.4 million visitors each year.

The event will be sorely missed by the provincial economy, to which it contributes more than $128 million annually, according to organizers. The event also has an annual impact of $93 million on the GTA and employs more than 5,000 seasonal workers during the nearly month-long event.

We're very sad to announce that the CNE will not light up this summer. The CNE Association announced today, with the support of the Province of Ontario & City of Toronto, that the 2020 CNE will not be moving forward. Read the full press release here: https://t.co/ER1KhU91nQ pic.twitter.com/s8k483EPln

Speaking at a news conference on Tuesday afternoon, Mayor John Tory echoed Ford’s sentiments while thanking the CNEA for making the unfortunate, but "responsible" choice to cancel this year’s event.

At the same time, Tory said that this year’s cancellation presents a rare opportunity to “reimagine” the longstanding Toronto tradition.

"I believe it is time for us to have a historic discussion about the 21st century 'Ex,'" Tory said.

"What is the 21st century “Ex”? How can we better reflect the roots of the fair—if you go all the way back, all those years—as a place to truly showcase the talents and creativity and innovation of our entire nation each and every year and do it in a way that is family friendly and fun."

"There’s no reason we can’t put on a globally admired and wonderful attraction of the calibre of our film festival at the CNE."

Tory added that he hopes the CNE can return to its origins in celebrating the achievements of Canadians in agriculture, science and technology

In the meantime, organizers say they are planning to bring the “fun of the fair” to would-be visitors through “creative and innovative ways.”

Visitors to the Canadian National Exhibition enjoy a ride. (The Canadian Press/Chris Young) 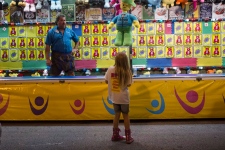 A young girl eyes an attraction at the Canadian National Exhibition in Toronto on Saturday, August 23, 2014. THE CANADIAN PRESS/Chris Young