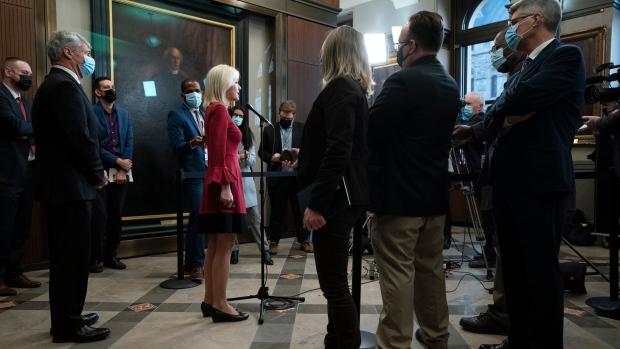 Conservative deputy-Leader Candice Bergen speaks to reporters as MP Gerard Deltell looks on in the Foyer of the House of Commons, in Ottawa, Wednesday, Nov. 24, 2021. THE CANADIAN PRESS/Adrian Wyld

OTTAWA - The Liberal government faced questions on Wednesday about whether ministers would bother to turn up to debates if the House of Commons returns to a hybrid system.

The Conservatives said it was “shameful” that before the election only one Liberal MP, Mark Gerretsen, was often present in the Commons chamber during the hybrid Parliament.

MPs debated a government proposal to return to a hybrid format in the House of Commons on Wednesday, which would give MPs the option to continue to attend the House remotely via teleconference.

Mark Holland, government House leader, said a hybrid Parliament would give MPs “flexibility” to participate virtually in proceedings during the COVID-19 pandemic if they fall ill. He said having fewer MPs in the chamber would help them social distance and also give those who are immunocompromised the option to work from home.

Holland said a virtual Parliament would also give MPs the option to work remotely if a new variant of COVID-19 emerged and the pandemic worsened.

He said if all MPs were made to come to Ottawa in person it would force MPs who “feel a little under the weather or a little bit ill” to make a “terrible choice” between staying at home and not representing their constituents or to “risk it and come in.”

But he faced questions from the Tories, Bloc Quebecois and NDP about whether ministers would come to the House, to face opposition MPs.

The Conservatives and Bloc Quebecois, who oppose a hybrid model, accused ministers of using a hybrid Parliament as an excuse not to show up to face scrutiny in the Commons.

Alain Therrien, Bloc MP for La Prairie, said in the last hybrid Parliament the Liberals “were hiding” and were behaving “like groundhogs.” He said some MPs enjoyed voting “from their basement” and “having snacks.” The hybrid model also gave MPs “less ability to use French,” he said.

The NDP supports a hybrid Parliament, but Peter Julian, the NDP House leader, asked in the debate whether the Liberals would commit to turning up because “in the past the government was represented by the Liberal MP for Kingston and the Islands,” referring to Gerretsen.

But Julian said a hybrid Parliament made sense, warning that in Europe, some countries “are beginning to go back into lockdowns.” He said all parties should unanimously back the move.

Bergen argued that the hybrid format is designed to protect the government from “scrutiny and accountability,” not to protect Canadians from the deadly virus.

She claimed the government's enthusiasm for virtual proceedings “doesn't have anything to do with protecting themselves or anyone else from COVID.”

“They are protecting themselves from accountability and scrutiny. We've seen that and we believe that it is time that it stopped,” she said.

The NDP backs the hybrid format because it allows all MPs - including those forced to self-isolate if they come in contact with someone with COVID-19 - to take part in Commons proceedings.

The debate over the hybrid Parliament was not expected to wrap on Wednesday.

NDP Leader Jagmeet Singh has said MPs should consider adopting the hybrid format permanently because it would allow MPs with young children to take part in debates from home.

On Wednesday, Singh told reporters he is open to the idea of also introducing rapid COVID-19 tests in the Commons to help protect parliamentary staff, in particular.

“Rapid tests were used in the campaign and I can see an argument for it,” he said.

Quebec Tory MP Richard Lehoux, who is fully vaccinated, is currently at home after being diagnosed with COVID-19 on Saturday, two days after attending an in-person Conservative caucus retreat.

Tory House leader Gerard Deltell said he had taken a COVID test after coming in contact with the MP and, along with other colleagues who also came into contact with him, would take a second test on Thursday. He said this was “following the rules.”

Conservative Leader Erin O'Toole has said all 118 of his MPs are now either fully vaccinated or have medical exemptions. He has declined to say how many have claimed an exemption for medical reasons.

Holland renewed his call Wednesday for O'Toole to say how many Tory MPs are unvaccinated. He said: “If it is more than one, if it is two or three or four or five or six, it's not logical, not at all.”

During the debate, Holland said: “That's not math I buy. He said the number of Tories with medical exemptions stretches the boundaries of what is possible mathematically.”

But the Tories accused the government of playing politics with public health. Deltell said: “We must limit the partisan political debate when it comes to public health.”

He said the Tories had not questioned the validity of a medical exemption given to a Liberal MP.

On Tuesday, Bergen had hit back at Holland's earlier questioning of doctors' medical exemptions saying it was “very dangerous” for a politician to question the integrity of medical professionals.

“I think that is reckless in many ways. Mark Holland is not a doctor. My colleague called him a 'spin doctor,”' she said.

Asked why he wanted to give MPs the option to work virtually from home in a hybrid Parliament, while allowing 20,000 people to go to a hockey match, Holland said the comparison was not the same because MPs had no option but to travel to Ottawa for work. He said MPs travel “from all over the country” and spend several days in Ottawa at a time.

He said the hybrid Parliament was designed to protect people's health during the pandemic. But he said he had “no idea” if it could continue after it is over.