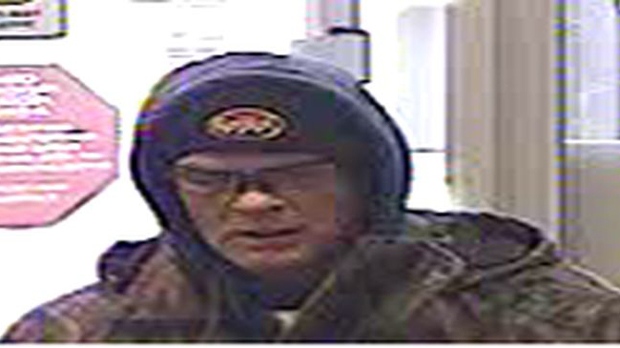 A suspect wanted in connection with three recent bank robberies in Scarborough is shown in a surveillance camera image. (Toronto Police)

Toronto police are searching for two suspects they have dubbed the “construction bandit” and the “envelope bandit” in connection with eight bank robberies in Mississauga, Etobicoke, Vaughan and east Scarborough over the last eight months.

Staff Insp. Mike Earl says the “envelope bandit” is wanted in relation to five robberies that occurred between Dec. 18, 2015 and March 4, 2016 including one in Mississauga, two in the Bloor West Village area of Etobicoke and two in Vaughan.

“His M.O. has always been to enter the bank wearing sunglasses and some kind of hoodie, producing a note with a large manila envelope, making a demand for cash and indicating he is armed,” Earl said.

He is described as a white male in his 30s, standing five-foot-five to five-foot-eight inches tall, with a thin build and a slight moustache.

In one incident he was captured on security camera wearing a blue Adidas hoodie with a black toque and scarf tucked underneath, dark sunglasses, blue jeans and gloves.

Another suspect, dubbed the “construction bandit,” is wanted in relation to three robberies of Scotiabank branches in the eastern reaches of Scarborough that occurred between Jan. 19 and March 22 of 2016.

In each case, Earl said a suspect entered the bank wearing eyeglasses, a hat and a hooded pullover. In each incident he produced a hold-up not indicating he had a gun and demanding cash.

The suspect is described as a white male in his 40s or 50s, standing six-feet or six-feet-two inches tall, with a heavy build.

Police do not believe that the two suspects are working together.

A reward of up to $10,000 has been offered by the Canadian Banker’s Association for information that leads to the arrest of either suspect.

A suspect wanted in relation to five bank robberies is seen in a surveillance camera image. (Toronto Police)