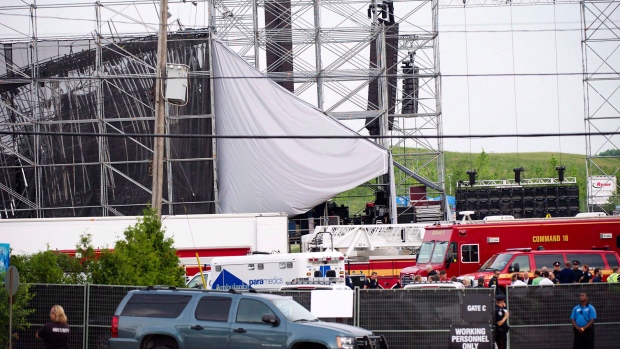 Emergency personnel are on scene near a collapsed stage at Downsview Park in Toronto on Saturday, June 16, 2012. THE CANADIAN PRESS/Nathan Denette

TORONTO -- A coroner's inquest into the death of a drum technician killed in a stage collapse at a Radiohead concert in Toronto five years ago was welcomed Thursday by the British man's family and the band he worked for, but both said the development still doesn't bring justice.

Scott Johnson, 33, was killed on June 16, 2012, when part of a massive stage structure crashed down just hours before the British rock band was due to perform at Downsview Park in Toronto's north end. Three others were injured.

Charges laid in the case were stayed earlier this year after a judge ruled the matter took too long to get to trial.

Johnson's father said the inquest -- announced Thursday by the office of Ontario's chief coroner -- is the "second-best" thing, adding that "it would have been much better to see the court case through properly, even if the case had to be heard again."

"We thank the coroner for bringing it forward and giving us the comfort that there will be an inquest," Ken Johnson said in a phone interview from the United Kingdom. "It does give us the opportunity to come back across and talk to people involved to create solutions to make sure it doesn't happen again."

He added, however, that the family is still disappointed that no one will be held responsible for his son's death.

A coroner's inquest is an independent investigation designed to focus public attention on the circumstances of a death, not to assign blame.

Radiohead also welcomed the inquest but said "it provides no justice for Scott and his family."

"We urge the Canadian authorities to look more closely into their treatment of the Downsview stage collapse and indeed all workplace deaths to ensure that accidents such as this can be prevented in the future," the band said in a statement.

The stage collapse, which the prosecution blamed on inadequate safety measures, prompted Radiohead to put off part of its 2012 European tour.

The subsequent trial was derailed when the presiding judge declared he had lost jurisdiction over the case given his appointment to a higher court. That decision led to a senior justice declaring a mistrial in May and a new hearing was planned.

In September, the charges in the case were stayed when a judge ruled the justice system had failed in allowing the case to take far too long to come to trial. The ruling was decried by the Johnson family, Radiohead and the Ontario Federation of Labour, which represents 54 unions in the province.

The office of Ontario's chief coroner said in a statement that a jury may make recommendations aimed at preventing similar deaths.

The inquiry date and location will be released at a later date, the statement said.