As engineers paint a bleak scenario for the Gardiner Expressway, city council is trying to figure out why millions of dollars that were allocated for repairs in the last decade were never used.

Councillors spent part of their day scratching their heads and pointing fingers in response to a warning from city engineers that nearly half of the deteriorating expressway’s elevated section is becoming structurally unstable and may be unsafe to drive on in at least six years if major repairs don’t occur before then.

Engineers are asking the city to spend half a billion dollars to rehabilitate the Gardiner over the next 10 years, plus annual maintenance costs of about $15 million after 2022.

Without major repairs in the next half-decade, there are fears a heavy truck could create a break through the upper deck, engineers warn.

On Wednesday, city staff reassured councillors and the public that in the next six years they have a plan to overhaul a crumbling two-kilometre section east of Jarvis Street, which is most in need of critical repairs.

In this six years after that project, the city plans to repair a one-kilometre section between Strachan Avenue and Rees Street that is in similar disrepair.

Several councillors, including Denzil Minnan-Wong and Gord Perks, said they were not aware of the engineers’ ominous warning, which was outlined in internal documents.

Minnan-Wong, chair of the public works and infrastructure committee, said he is concerned about the safety of the expressway, and he doesn’t think the public is surprised about the engineers’ findings.

As the city debates the future of the elevated portion, Minnan-Wong said the city should repair and maintain it because tearing it down could cost more, in addition to creating major gridlock for motorists.

“To learn about these recent reports concerns me, but unless we spend the money to fix it we’re going to be in a lot more trouble,” Minnan-Wong told CP24 on Wednesday. “I think we need to fix it and keep this important piece of infrastructure.”

He said councillors are considering a proposal to spend more than $500 million on repairs over the next decade.

As they gathered for a budget committee meeting at city hall, councillors vowed to find out why money that was allocated for Gardiner repairs wasn’t spent.

During a break in the meeting, Coun. Gord Perks, who was vice-chair of the public works committee from 2008 to 2010, faced pointed questions from reporters because, according to documents, the city allocated $50 million for Gardiner work during that three-year period but only $15 million was spent.

Perks said he doesn't know what the remaining money was spent on.

“I voted and directed staff to go and spend the money on the repairs, they evidently didn’t," he told reporters.

Minnan-Wong said he is trying to get an explanation, but speculated it may have been partly due to the fact that some projects weren’t completed within a calendar year and they, along with the cash, were carried over to the following year.

Councillors also squabbled over an environmental assessment on the Gardiner’s future – to keep it up and maintain it or tear it down – that was abruptly halted after the 2010 municipal election.

Minnan-Wong said the decision to abandon the assessment was made by Waterfront Toronto “in consultation with” the city because Mayor Rob Ford was committed to keeping the elevated portion.

Because of that commitment, Waterfront Toronto no longer considered the assessment a priority, Minnan-Wong said.

Perks accused the Ford administration of interfering with the assessment and holding up critical repairs.

According to the Toronto Star, documents obtained through a freedom of information request reveal an internal communications strategy in an apparent attempt to convince the public that the Gardiner’s cracking problem was superficial.

To prepare for interviews with reporters, top city officials were reportedly given a document of “key messages” that began with the phrase “The Gardiner is structurally sound.”

Toronto MP Olivia Chow, who is being encouraged by some to run for mayor in the next election, said she has been pressuring the federal government to provide financial support to the city.

Chow claims she was recently told by the federal transportation minister that it’s up to the city to come up with the money for the expressway. 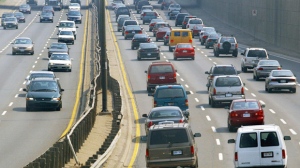