The Ford government has announced that it will gradually lift the stay-at-home order across Ontario in the coming weeks and allow businesses in many parts of the province to reopen amid case counts that have now been on the decline for weeks.

But new projections prepared by the province’s science table warn that cases could rise “dramatically” if public health restrictions are lifted, potentially leading to a third wave of the pandemic.

The modelling says that in order to account for the B.1.1.7 variant, which is believed to be at least 50 per cent more contagious than other strains, the province needs to get its reproductive number down to 0.7.

The problem is that the Ontario’s reproductive number has hovered between 0.8 and 0.9 in recent weeks and has only approached 0.7 once briefly in June.

The modelling says that with a reproductive number of just 0.9 the variant would “trigger exponential growth” once it becomes the dominant strain, potentially overwhelming the healthcare system in the process.

“If the B.1.1.7 variant behaves as it did in the United Kingdom cases will start to grow here again in late February or early March. That is unless we can limit the spread through public health measures,” Adalsteinn Brown, co-chair of the province's COVID-19 science table, told reporters on Thursday afternoon. “The UK example is important. In a matter of months, the B.1.1.7. variant went from detection to the dominant strain and as it became the dominant strain cases more than tripled in a month. At the same time their healthcare system strained with nurses forced to care for four to eight times as many patients as usual and there were daily deaths regularly in excess of 1,000 people. There is little room for error in our response to this threat.” 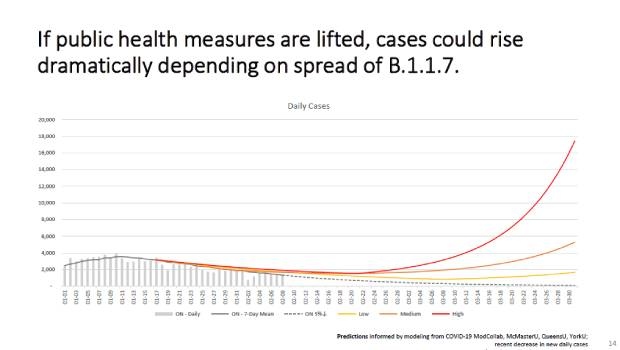 Brown said that the various public health measures, including the stay-at-home order, have resulted in declining case counts, hospitalizations and positivity rates in recent weeks.

In fact, the province’s seven-day average of new cases has decreased from a peak of 3,273 on Jan. 15 to 1,264 today, providing a glimmer of hope to many businesses that have struggled amid the provincewide lockdown.

Nonetheless, Brown said that if restrictions are lifted now we will face the “very real risk of a third wave and potentially a third lockdown” in the spring due to how contagious the B.1.1.7 variant is.

“Vaccination, although important, won’t actually affect a significant amount of ICU admissions and this translates over the short run into significant growth in the number of ICU admissions with the total creeping up to around 400 by the end of March (from 299) in the most likely scenario,” he said. 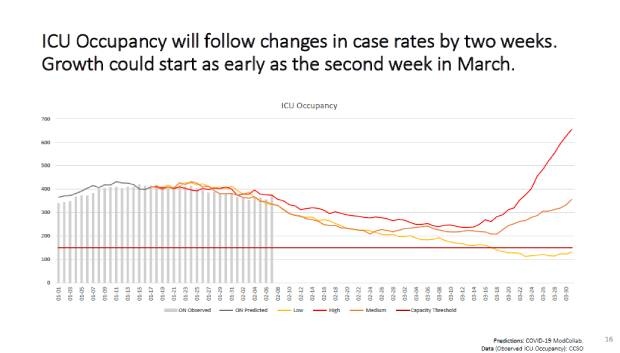 B.1.1.7 variant probably accounts for up to 10 per cent of all cases already

There have been 236 confirmed cases of the B.1.1.7 variant in Ontario so far but Brown said that the strain probably accounts for five to 10 per cent of all cases.

He said that the good news is that Ontario likely can avoid a third wave with “aggressive vaccination and “sticking with the stay-at-home order.”

It has also amended its tiered framework for COVID-19 restrictions to allow retail stores to reopen with capacity limits, even in regions place in the most restrictive grey lockdown category.

“We are in a very precarious and tenuous situation at this time,” Chief Medical Officer of Health Dr. David Williams said during Thursday’s press conference. “We have our numbers coming down and that is to the credit of what you have done and the hard work you have put forward. But with the variants of concern while we can open up some aspects within the framework we can’t open up writ large and we have to be more vigilant and more careful with our personal contact.”

Williams said that it is important to note that there is an “emergency brake” built into the provinces framework, which will allow local officials to quickly lock down their communities if case counts start to rise.

Brown, however, warned that there may be a need for more stringent restrictions than the ones that will be in place once the province transition back to its tiered framework.

He said that the difference between opening and closing could into “hundreds of ICU admissions” and 400 to 500 more deaths.

“We are operating with uncertainty. That is the nature of a new disease with new variants but we can offer from the science this: if we're able to push the impact of COVID-19 down further by sticking to public health measures and aggressive vaccination we can avoid a third wave and hope for a late spring and summer that is much safer and much more open,” he said.

In a news conference held following the release of the new projections, NDP Leader Andrea Horwath said that the data underscores the fact that the Ford government needs to “change direction and have us all buckle down for a little longer.”

She conceded that keep restrictions in place “is not what people want to hear right now” but she said that she is “more interested in saving lives and helping to crush this virus once and for all” than “listening to business lobbies and inside political advice.”

Paramedics wheel a gurney out from the emergency department at Mount Sinai Hospital in Toronto, Wednesday, Jan. 13, 2021. THE CANADIAN PRESS/Cole Burston