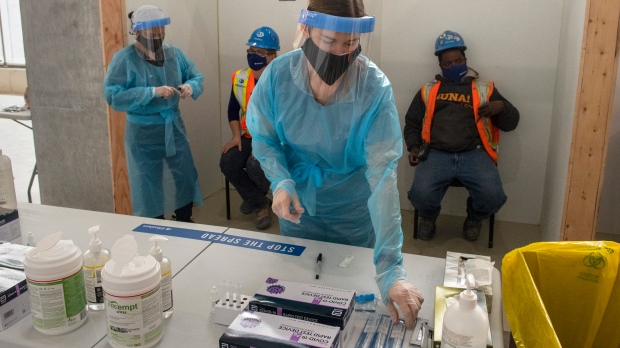 Ottawa has introduced new ways for small and medium businesses to get access to rapid COVID-19 tests to stop workplace spread and Alberta has announced a deal with neighbouring Montana for truckers to get vaccinated south of the border.

Tests that screen for the virus in as little as 15 minutes can be ordered from 40 Shopper's Drug Mart locations in Ontario hot spots. The Canadian Chamber of Commerce's network is also helping to distribute kits to enterprises across the country.

Tests can also be ordered directly through a new federal online portal.

Perrin Beatty, CEO of the Canadian Chamber of Commerce, welcomed the move.

“The third lockdown must be the last and, to ensure it is, we need to bring more tools to the fight against COVID-19,” he said in a news release. “Rapid testing will play an important role in keeping workers safe and helping many businesses reopen and stay open. That's the only path to real, sustainable economic recovery.”

Meanwhile, some 2,000 Alberta truck drivers who transport goods across the border will, as of Monday, be able to receive the Johnson & Johnson vaccine at a rest stop in Montana at no cost and without appointments.

Saskatchewan and Manitoba have similar deals with North Dakota.

In Manitoba, fines for COVID-19 rule-breakers that currently range from just under $300 to $5,000 are being doubled for subsequent offences.

Premier Brian Pallister said people who refuse to pay can have their wages garnisheed and be blocked from renewing their driver's licence.

Health officials reported 502 new COVID-19 cases and one death in the province Friday - the highest one-day case count since the middle of the pandemic's second wave last winter. They said they are adding intensive care beds to prepare for a surge in demand.

To the east, Quebec hit a single-day record with more than 102,000 vaccines administered Thursday and has now given at least one dose to about 40 per cent of the population.

In Ontario, nearly 144,000 doses of vaccine have been given since its latest report - for a total of almost six million.

The province recorded 3,166 new cases of COVID-19 and 23 more deaths linked to the virus. Hospitalizations there have dropped by 40.