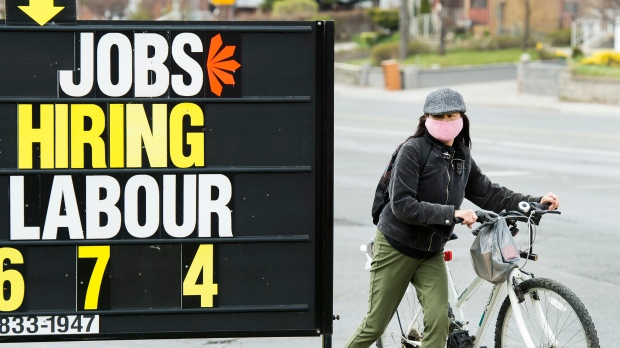 A woman checks out a jobs advertisement sign during the COVID-19 pandemic in Toronto on Wednesday, April 29, 2020. Students are starting to look for summer work, with few options in the usual places. THE CANADIAN PRESS/Nathan Denette

TORONTO - About one in three workers in Ontario has been affected by the economic shutdown caused by the COVID-19 pandemic, the province's fiscal watchdog said Friday, warning that the impacts will be more profound the longer business closures continue.

Financial Accountability Officer Peter Weltman released the finding in a new report on job losses in Ontario since the crisis began.

In all, 2.2 million people have been affected by the shutdown: an estimated 1.1 million workers in the province have lost their jobs, and another 1.1 million have seen their hours sharply reduced.

“It's awful,” Weltman said. “But it's not surprising, really. This is different than the typical recession. This is a recession where the economy was effectively shut off by the government.”

According to Statistics Canada, Ontario lost 689,200 jobs in April, bringing its employment down to the lowest level since 2009. The province's unemployment rate climbed to 11.3 per cent, the highest it has been since 1993.

The FAO report found that since February, temporary worker job losses were occurring at twice the rate of permanent employees - 28 per cent compared to approximately 15 per cent. Nearly 87 per cent of the job losses between February and April came in the private sector.

The report also shows that job losses were largest among women. The FAO said 577,200 women lost their jobs between February and April, compared to 514,800 men.

The job losses came across all industrial sectors, but those that are public-facing or require close contact suffered significantly. The report said wholesalers and retailers lost 230,900 jobs while accommodation and food services lost 215,800.

The report also notes some reason for optimism, however: the province's economy could experience a sharp bounce back provided COVID-19 cases don't flare up and cause a second lockdown.

But the dangers of that scenario for the economy are also troubling, Weltman said.

“Anything that delays a reopening of the economy will have more lasting economic impacts,” he said. “The longer people go without work, the longer businesses go without cash flow, they become more in danger of shutting down permanently. So these are the sorts of things that hopefully can be avoided.”

The report comes a day after the province unveiled its plan to start to reopen more parts of the economy next Tuesday.

Green party Leader Mike Schreiner said the FAO report highlights the need for the government to take urgent action to save small businesses.

Schreiner said the Progressive Conservatives should freeze commercial rent evictions until the end of the pandemic and provide grants of up to $5,000 to help with rent, utilities and compliance with public health measures.

“With one in three jobs in this province directly affected by the virus, the vulnerability of our economy and social safety net has been laid bare,” he said in a statement. “We must focus on immediate help for small businesses to prevent job losses and maintain the vibrancy of our downtowns and neighbourhoods.”

“The Ford government needs to stop passing the buck to the federal government,” she said. “Ford needs to step up to offer real financial supports to workers and small businesses in Ontario, especially women, so they can get through the worst of this crisis and begin to re-build our economy once the pandemic is over.”

“Ontario's economic response will need to be tailored to support all aspects of the economy, especially small businesses which create the majority of local jobs,” she said in a statement. “We must now provide them the tools to weather this storm, while building consumer confidence, on this road to recovery.”