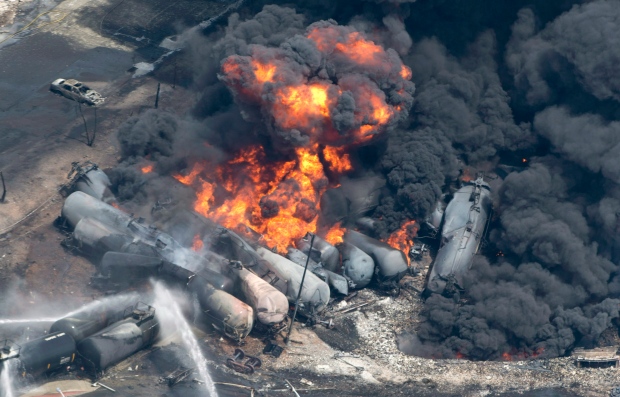 Smoke rises from railway cars that were carrying crude oil after derailing in downtown Lac-Megantic, Que., on Saturday, July 6, 2013. (The Canadian Press/Paul Chiasson)

MONTREAL -- The $430-million settlement fund in the Lac-Megantic train disaster is illegal because the Quebec judge who approved it did not have the authority to do so, Canadian Pacific Railway said in its official leave for appeal Monday.

Documents obtained by The Canadian Press state the railway will argue that Superior Court Justice Gaetan Dumas erred in law by overstepping his jurisdiction in granting compensation to families of the 47 people killed on July 6, 2013.

The appeal application asks the court to cancel the fund and to rule that Dumas had no authorization to use Superior Court bankruptcy proceedings to offer companies releases from legal liability.

CP must still receive permission from a court to proceed with the appeal. If permission is granted, distribution of the millions of dollars offered to victims and creditors could be delayed by at least several months.

Earlier this month, Dumas approved the $430-million settlement package offered by companies accused of responsibility in the derailment.

CP (TSX:CP) is the only company out of roughly 25 accused in the tragedy to not participate in the offer. It maintains it bears no responsibility in the disaster.

The settlement offer is tied to the bankruptcy proceedings in the United States and Canada of Montreal Maine and Atlantic Railway Ltd. (MMA), the now-insolvent railroad company that owned and operated the train that derailed.

All of the companies that offered money to victims and creditors were given releases from legal liability on both sides of the border for their part in the disaster.

In approving the fund, Dumas rejected three CP motions: one seeking access to privileged documents; another to have the fund cancelled; and a third to have the proceedings moved to Federal Court.

The fund still needs to be accepted in U.S. court but lawyers close to the proceedings say it's likely to be green-lighted.

CP has already asked for permission to appeal the ruling regarding access to documents.

However, he said "the jugement on the first instance was well-drafted and well-reasoned and I think (CP) will have a hard time in appeal."

He added that even if CP is successful he will push to have the proceedings fast-tracked and added that a ruling can technically be handed down in a few months, not years.

Representatives from CP could not be reached for comment Monday.

CP's two requests for appeal will be heard in court on Sept. 9 in Montreal.