CREA reports home sales in March down compared with a year ago, prices also down 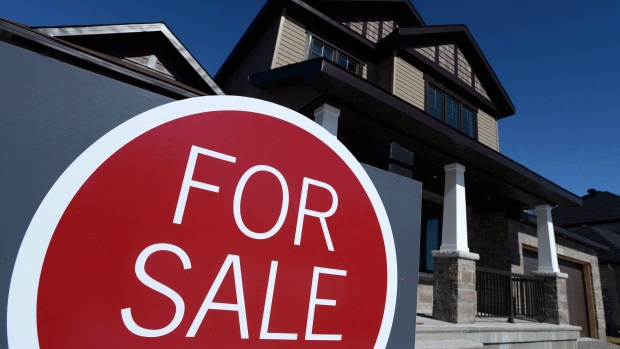 OTTAWA -- Home sales in March fell to their lowest level for the month since 2013, the Canadian Real Estate Association said Monday.

The association said sales through the Multiple Listing Service fell 4.6 per cent compared with a year ago, while the average sale price also moved lower.

Sales in B.C., Alberta and Saskatchewan were more than 20 per cent below their 10-year average for the month, while Quebec and New Brunswick were well above-average, CREA said.

On a month-over-month basis, home sales in March were up 0.9 per cent compared with February.

Bank of Montreal chief economist Doug Porter said the results were "a tad disappointing" and reinforced the view that the housing market is still adjusting to the many policy changes in recent years.

However, he noted the regional divide was wide and that the fundamentals look to become a bit more supportive in the year ahead.

"We continue to contend that prices, sales and starts are likely to hold broadly stable nationally in 2019 amid the many moving parts for the market," Porter wrote.

Excluding the Greater Vancouver and Greater Toronto Area, two of the country's most active and expensive markets, the average price was just under $383,000.

The dip in the average price came as the number of newly listed homes rose 2.1 per cent in March as new supply rose in about two-thirds of all local markets.

With new listings improving more than sales, the national sales-to-new listings ratio eased to 54.2 per cent compared with 54.9 per cent in February.

There were 5.6 months of inventory on a national basis at the end of March, in line with the February reading and one of the highest levels for the measure in more than three years.