A female cyclist is in hospital with life-threatening injuries after she was struck by and became pinned under a float trailer that was being hauled by a large truck Wednesday morning, Toronto police say.

In a co-ordinated rescue, firefighters used jacks and cribbing to raise the trailer so that they and paramedics could crawl underneath it to reach the 25-year-old woman and bring her out on a backboard.

Police said the woman came into contact with the right side of the trailer as she cycled in Spadina Avenue’s northbound lanes, just south of Dundas Street West, at about 7:15 a.m. The woman was riding in the curb lane, where there is a sharrow lane for cyclists, with shared lane markings.

After making contact with the side of the trailer, the woman was caught by its rear wheels and dragged a short distance, police said.

The northbound truck, also travelling in the curb lane, came to a stop while the woman was under the trailer, which was being used to haul machinery. The 2007 Volvo truck was being driven by a 50-year-old man, police said.

Despite her injuries, she was able to respond to emergency personnel at the scene, said Toronto Fire Services district chief Colin Giffin.

After the woman was freed, she was rushed to hospital with serious injuries to her legs and pelvis, a Toronto EMS spokesperson told CP24.

Police are investigating the cause of the collision.

Firefighters and paramedics work to free a female cyclist after she was struck by a large truck on Spadina Avenue, near Dundas Street West, on Wednesday, Oct. 16, 2013. 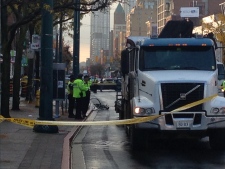 A female cyclist was seriously injured when she was struck by a truck on Spadina Avenue on Wednesday, Oct. 16, 2013. (Mathew Reid/CP24)