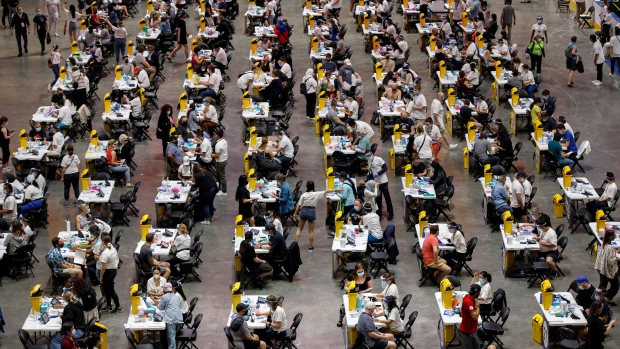 Toronto’s top doctor says she has faith that the city will be able to push its COVID-19 vaccination rate even higher as provincial officials suggest Ontario needs to reach around 90 per cent to protect against the latest variants.

According to the latest figures, just under 80 per cent of Toronto residents 18 and over have had at least one dose of COVID-19 vaccine, while more than 65 per cent are fully vaccinated.

While that figure might seem high, Ontario’s top doctor suggested this week that the province may need to reach a 90 per cent vaccination rate in order to ensure community-level protection against the more infectious Delta variant, first identified in India.

Speaking with CP24 Thursday, Toronto’s Medical Officer of Health Dr. Eileen de Villa said that while vaccination rates may have slowed, the city isn’t finished yet.

“I'm not prepared to say that we're done yet,” de Villa said. “In fact, as you mentioned, we're still seeing thousands of people coming forward, not only to get their vaccinations completed but also getting first doses. So I remain quite optimistic and I have a lot of faith in the people of Toronto, which has certainly been well-earned over the course of the pandemic.”

While Ontario was regularly administering more than 200,000 doses a day from mid-June to early July, that number has dropped off as more people have become fully vaccinated.

The province has said that it will shift strategies as the bulk of the population gets vaccinated, moving from mass vaccination sites to more targeted approaches, including doctors’ offices.

The city has also started shifting its strategy, undertaking a hyper-local campaign of pop-up clinics and marketing to target those who still haven't received a dose in parts of the city with lower vaccination rates.

Toronto is holding a two-day pop-up clinic in North York this weekend in an effort to get more COVID-19 vaccine doses into arms in areas where there has been lower uptake.

The clinic is part of the “Team Toronto Home Stretch Vaccine Push” and will run from 8:30 a.m. to 10:30 p.m. at Mel Lastman Square Saturday and Sunday.

According to city officials, the area lags behind the rest of Toronto by as much as six to 10 per cent for first doses.

The weekend clinic is being dubbed #VaxTheNorth and aims to administer thousands of doses to those 12 and over.

People can walk in to get a shot or book an appointment.

The city has made nearly 3,000 calls to let people know about vaccine pop-up clinics through a special call centre set up to reach out to parts of the city were vaccination rates are lower. City officials said Wednesday they plan on reaching out to around 50,000 residents through telephone broadcast messages in English, Korean, Farsi and Mandarin to let them know about the North York clinic.

The city also said Wednesday that starting tomorrow, all nine mass immunization clinics in Toronto will accept walk-ins from noon to 7 p.m. each day.

“By lowering the barrier to vaccination across Toronto, the city is working to reach the approximately 20 per cent of Toronto adults who have not initiated vaccination and the 125,000 people who can accelerate a second dose scheduled for later in the year,” the city said in its release.

In the meantime, York Region said that it is now taking walk-in appointments at its vaccination clinics.

Starting today, anyone who lives, works or goes to school in York Region can walk in to receive a first or second dose at the following clinics:

The region also ran two outdoor pop-up clinics today, one at Promenade Mall in Thornhill and another at Hillcrest Mall in Richmond Hill. Both offered the Pfizer BioNTech vaccine for first and second doses.

In Peel Region, youth 12- 17 are being allowed to skip the line today and tomorrow to get shots. Peel Region also said that it will hold another “Pfizer Friday” event this week offering 7,000 Pfizer shots through appointments to help vaccinate those 12 and up who might be hesitant to mix vaccine types.