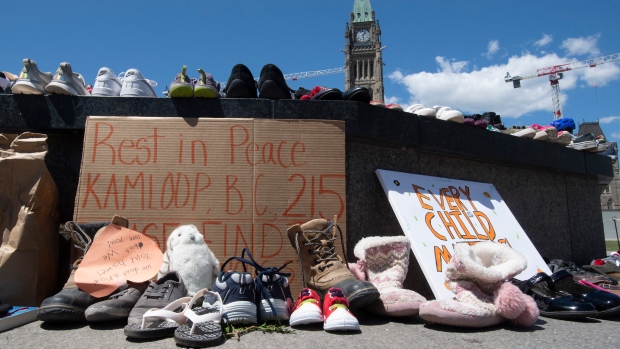 Shoes sit on the Centennial flame in recognition of discovery of children's remains at the site of a former residential school in Kamloops, B.C., on parliament hill in Ottawa on Monday May 31, 2021. THE CANADIAN PRESS/Adrian Wyld

OTTAWA - The discovery of 215 children's remains in an unmarked burial site in British Columbia has revived discussion about the residential school system, which international law experts say was a genocide against Indigenous Peoples.

Ryerson University law professor Pamela Palmater said the definition of genocide in the United Nations' convention on the prevention and punishment of the crime of genocide applies to Canada's actions.

She said the convention states that a genocide is committed when members of a group are killed, subjected to serious physical or mental harm, put in conditions to destroy them, become victims to measures intended to prevent births or have their children forcibly transferred to another group.

Canada only needs to be guilty of one of the five acts in the UN convention, with the intention to destroy, in whole or in part, a national, ethnic, racial or religious group, to commit genocide under international law, Palmater said, but she argued it was guilty of all five.

“This is what genocide looks like in any country that has committed genocide over any period of time â€¦ unmarked graves of innocent children,” said Palmater.

“All eyes are on First Nations as we attempt to digest the most recent evidence of the genocide against our people, our children.” Bellegarde said in a news release Tuesday.

He said the federal government must respond to First Nations seeking assistance in finding their lost children and support their mourning Indigenous communities.

“I demand that all governments commit to supporting First Nations seeking thorough investigations into former residential school sites and to take any, and all action available to hold perpetrators accountable for their actions.”

Guelph University professor David MacDonald said the forcible transfer of children, which is an act of genocide under the UN convention, occurred in the system of residential schools in Canada.

“Indigenous children with status were basically forced to go to schools provided by the state, and in many cases, there were no day schools on or near the reserve. So they were taken to these â€¦ church-run boarding schools where they were essentially forcibly assimilated,” he said.

“That fulfils the requirements of the UN Convention.”

The Truth and Reconciliation Commission released its report in 2015 after years of study into the church-run, government-sponsored institutions, which operated in Canada for more than 120 years.

“States that engage in cultural genocide set out to destroy the political and social institutions of the targeted group,” it said.

MacDonald said the TRC concluded the residential school system was “cultural genocide,” not a genocide under the UN convention, because it wasn't allowed under its mandate to make legal arguments.

The TRC was an outcome of a settlement agreement that ended a class-action lawsuit brought by the survivors of 130 residential schools who sued the Canadian government and the churches.

“Their job was to collect information, but they weren't allowed to actually make any determinants about whether the government broke any laws.”

In 2019, the inquiry concluded in its 1,200-page report that Canada deliberately and systematically violated racial, gender, human and Indigenous rights, and that its actions amount to genocide.

Following the release of the report, Prime Minister Justin Trudeau accepted the inquiry's finding that what happened amounts to genocide but said Canada must focus on actions to fix the situation, not on words.

Ryerson professor Palmater, also a Mi'kmaq lawyer, said Canada has been found guilty of both historic and ongoing genocide by the missing and murdered women's inquiry.

“Not in an academic way or political way - this wasn't about theory. This was about a concrete legal assessment done by the national inquiry,” she said.

“There's three times more Indigenous children in foster care than were in residential schools,” she said.

“Children in foster care here suffer higher rates of physical abuse, sexual abuse, lack of education, lack of access to health care, emotional abuse, attacks on their culture and, of course, two thirds of all native people in prisons today come from the foster care system, a fifth came from residential schools.”

Canada could only face legal consequences for its actions against Indigenous Peoples if a court rules that the country has committed crimes against humanity or genocide, said Bruno Gelinas-Faucher, a law professor at the University of Montreal and a PhD candidate in international law at the University of Cambridge.

He said Canada has criminalized genocide and crimes against humanity within its domestic legal system, but the initiation of a criminal investigation is in the hands of public prosecutors.

The treaty creating the International Court of Justice says that states can bring cases to it, but it can also provide advisory opinions on legal questions referred to it by bodies including the UN General Assembly.

“It's not impossible that could be an advisory opinion regarding, for example, the issue of colonial genocide of Indigenous people,” said Gelinas-Faucher.

The International Criminal Court can examine cases referred by the UN Security Council or the state itself, or if the court prosecutor launches an investigation against certain individuals for international crimes.

“There are many criteria and thresholds before this can be done,” he said.

“(The court would ask) one, is that the type of crime that falls within the jurisdiction of the court? Does it meet the definition of genocide, crimes against humanity?

“Two, the court only prosecutes the most heinous, the grievous crime, so this is a kind of a tough call, but we won't prosecute kind of low level officials â€¦ The court goes only after the big fish.”

This report by The Canadian Press was first published June 1, 2021.