Distance needed even when walking around: experts 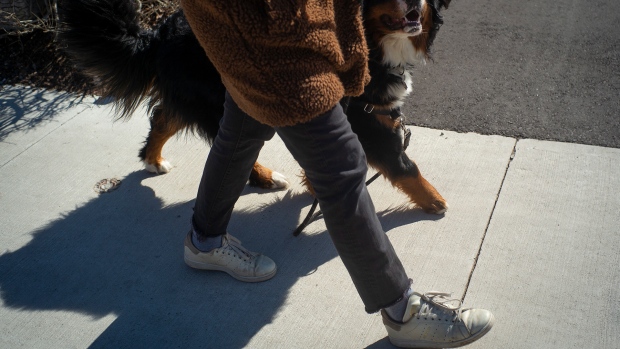 Walking has become a welcome relief for people feeling cooped up in these days of social distancing, but even walking the dog presents challenges in maintaining an appropriate distance from others. A woman walks a dog in Toronto, March 8, 2020. THE CANADIAN PRESS/Graeme Roy

Walking has been a welcome relief for people feeling cooped up in these unprecedented times of social distancing, but even this ordinary activity raises questions about what's appropriate when approaching fellow pedestrians.

Exercise and fresh air are important for both physical and mental health during the COVID-19 outbreak - but so is following some key guidelines, advises Corinne Hart, associate professor of Ryerson University's Daphne Cockwell School of Nursing.

Maintaining six feet of space is at the top of her list.

With its wide roads that wind through the cemetery's picturesque 200 acres, it's the ideal place to keep a safe distance from others while walking, said Hart.

“It's so nice, and there's lots of space,” Hart said Thursday in a phone interview.

But it's important to keep two arm lengths away from people, she added.

“Don't stop and have chats with people where you're going to get close. The smartest thing is to err on the side of caution and keep far away.”

And while dog parks are a popular place to hang out - they've been as busy as ever this week as people flock outdoors - Hart said it's better to stay away from them. Congregating anywhere isn't a good idea, and dogs are unpredictable.

“I was shocked at how many people were in the dog park actually when I was walking today,” she said. “I would say don't.”

Dogs might get into tussles, prompting owners to rush and pull them apart, or go talk to the other person, she explained.

“Unless you've got a big dog park (to maintain distance) and your dog is really well-behaved and is going to come when you call.”

Hart, who teaches community health nursing and practice at Ryerson, also cautions against walks for people in self-isolation. While people in isolation surely crave the outdoors more than anyone, self-isolating means halting all contact with others. Leaving the house presents too many risks.

“If by some chance something happens - you fall, you get hurt, there's an accident - then you're stuck out there with people all over you,” said Hart, who's also Ryerson's academic lead for interprofessional education in the Faculty of Community Services.

But for those not in self-isolation, outdoor exercise is recommended. And biking and running don't pose any more of a risk than walking, as long as they're not done in close contact with others.

“Because the virus is transmitted not just by being on your skin, it's transmitted by coughing, it's by droplets,” said Hart. “So unless somebody is running by you and coughed in your face, I don't think there's a danger.

“But going for a run and running past people, I think it's probably not a bad idea at all,” she said.