Coun. Doug Ford is lashing out at critics of his brother, Toronto Mayor Rob Ford, for suggesting the mayor was asked to leave a public event because he was too drunk.

“The only thing I’m concerned about with Rob is that he’s overweight,” Coun. Ford said on CP24 Wednesday. “He’s in very good shape aside from him being overweight.”

The reaction comes after a story appeared in the Toronto Star claiming the mayor was asked to leave a Feb. 23 charity dinner because he was too intoxicated.

Coun. Ford lashed out at the Star Wednesday for publishing the story, saying it was part of a long-running vendetta the paper has against his brother.

“We’ve been dealing with it from the time Rob said he was going to be running for mayor,” Ford said. “This is part of their (the Star’s) agenda. And it’s not just the Toronto Star. There’s a group that went after Rob three times now unsuccessfully.”

Six members of the organizing committee for the Garrison Ball have penned an open letter suggesting that Mayor Ford was never asked to leave the event.

The letter was released Tuesday night following the publication of the story.

The story quoted several unnamed organizers and guests as well as Coun. Paul Ainslie, who said he asked the mayor’s chief of staff to encourage Ford to leave the event.

“Some people came up to me and they had some concerns about the mayor, so I went up and chit-chatted with him for a few minutes and then I told his chief of staff it would be better for everyone involved if the mayor left,” he said.

According to the Star report, several unnamed guests described Ford as “stumbling,” “rambling,” and “intoxicated,” during his time at the event, which was held to raise money for the Wounded Warriors military charity and was attended by Minister of National Defence Peter MacKay and Chief of Defence Staff Gen. Tom Lawson.

Ford has denied the allegations.

“It’s an outright lie,” he told reporters Tuesday afternoon. “It is the Toronto Star going after me again and again. It's lies after lies after lies.”

On Wednesday morning Deputy Mayor Doug Holyday told reporters at city hall that the mayor is coping with the allegations "as well as can be expected."

"What can you do? People make allegations and you can say it's not true but how do you prove it either way really?" he said.

Responding to suggestions that Ford might react by backing out of the public eye, a defiant Coun. Ford said his brother would make even more public appearances.

“Rob’s a mayor of the people. He loves going out there,” Coun. Ford said. “If you ever go out to an event with Rob, he’s like a rock star. People surround him, they line up to get pictures with him because he’s the average guy. He understands the concerns of taxpayers.” 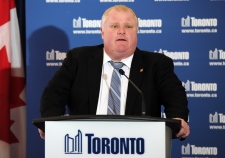