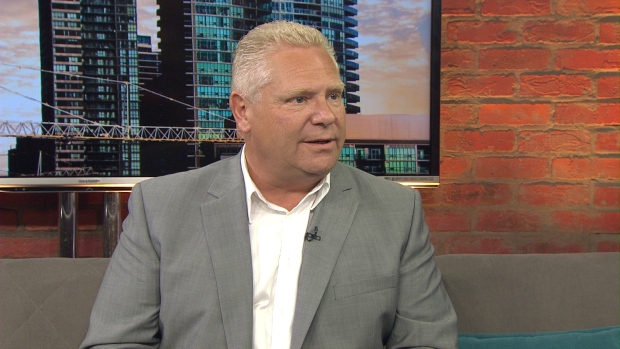 Former mayoral candidate Doug Ford says he is mulling over taking another run at the city’s top job in 2018.

Ford, who entered the 2014 race at the last minute following his brother’s cancer diagnosis, tells CP24 that he will either run against Mayor Tory in 2018 or run provincially under the Progressive Conservative party banner.

“There are two areas that are in a financial disaster right now and it’s the City of Toronto and the Province of Ontario,” Ford told CP24 on Sunday morning. “I am just going to have to weigh out my options, talk to the family and see how we are going to serve the people.”

Ford, who served one terms as city councillor for Ward 2, said he is not leaning one way or another regarding his future political ambitions right now but plans to make a decision “in the next year.”

In the meantime, he said he is watching the developments at city hall with interest.

“There is no fiscal management whatsoever at the city any more. Everyone is running wild. The gravy train is in full swing,” he said. “He (Tory) has gotten away with everything so far and someone has to hold him accountable.”

This isn’t the first time that Ford has openly discussed his political ambitions. Ford repeatedly discussed seeking the leadership of the provincial Progressive Party after Tim Hudak stepped down, however he eventually announced that he would instead support Christine Elliot for the job.