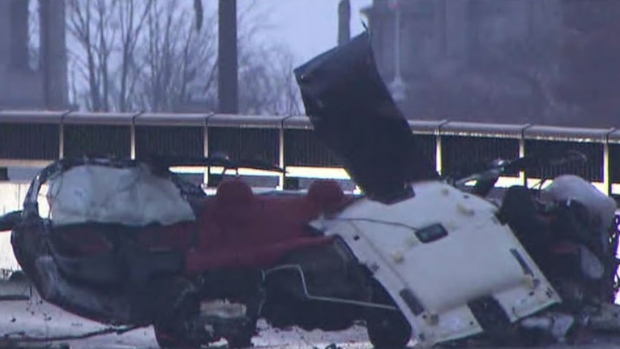 A badly-damaged vehicle is seen on Jameson Avenue in Toronto after a fatal crash on March 6, 2022. (CP24)

A 30-year-old man has been arrested and charged after a female passenger in his car was killed in a crash in Toronto two months ago, police say.

On March 6, 2022, Toronto police responded to a single-motor vehicle collision at the intersection of Lake Shore Boulevard West and Jameson Avenue.

Police said a man was operating a black, 2018 BMW M4 eastbound on Lake Shore Boulevard West at a high rate of speed.

The driver reportedly crossed into the westbound lanes and struck a concrete barrier.

Police said the driver sustained minor injuries and a 19-year-old female passenger in the vehicle suffered life-threatening injuries and later died in hospital.

On Saturday, police said an arrest was made in connection with the incident.

The driver, 30-year-old Kumaran Sankarkumar, of Oshawa, has been charged with dangerous operation of a conveyance causing death and impaired driving causing death.

He is set to appear in a Toronto courtroom on July 14 via video link.