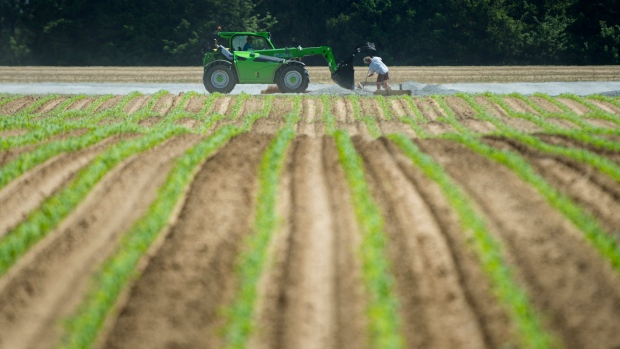 Workers do maintenance at the Scotlynn Group asparagus farming facility near Vittoria, Ont., in Norfolk County on Wednesday, June 3, 2020. THE CANADIAN PRESS/Nathan Denette

Peggy Brekveld has owned a dairy farm with her husband in Thunder Bay, Ont., for nearly three decades and says she's never seen a drought this bad.

Very little rainfall across much of northwestern Ontario, combined with nearby creeks running dry, has left their livestock and their land parched - and the situation is leading to a host of problems.

“This is the worst we have seen,” Brekveld said in an interview. “Our creek went dry probably three weeks ago, and one of our two wells that feeds the old farm and the house went dry a week and a half ago, so we're now working from one well.”

Farmers in northwestern Ontario say the scarcity of water has led to the loss of crops, early harvests to salvage what can be saved, and premature sales of cattle to slaughterhouses because there isn't enough food for them.

Brekveld said livestock on her farm are being fed from bales usually reserved for the winter while the grain that is growing in her fields is being cut down earlier.

“We have taken a good portion of our wheat crop and instead of letting it go to full maturation, we have chopped it and made it into silage for our cows. At the end of the day, the cows will get fed first,” Brekveld said.

Selling cattle prematurely has a downside, she said, explaining that prices are driven down if there's a large volume of livestock on the market earlier than usual.

When farmers eventually decide to buy more livestock to boost their operations, Brekveld said costs may be higher and herd genetics a farmer may have cultivated could be lost.

“I think that at the end of this, a number of farmers are going to exit the industry and that's the big challenge,” she said.

Jason Reid, who runs a farm in the same region with some 100 cows and 250 sheep, said he's also worried about his livestock.

“We're definitely seeing reduced milk production in the cows, reduced growth in the calves,” he said. “We're not seeing our peak potential in growth because of (the) lack of nutrition, which reduces productivity.”

One of the main challenges, Reid said, is getting enough water to the livestock since they rely on surface sources that have nearly all dried up. To ensure his animals are hydrated, Reid has been hauling water in big plastic tubs filled from a truck with a water tank.

“The number one thing we do is pray for rain every day,” he said. “We tend to get more rain towards the end of August and into September so we're sort of banking on that to get these crops we're planting now to grow, to try and get some September-October-November grazing.”

Kim Jo Bliss, who runs a beef farm in the Rainy River area, said a typical summer would see rainfall every third day or more in the region -- not so this year.

“All of a sudden, we were in this major drought and we could see our pastures very quickly go from having grass to no grass because there was no regrowth,” she said.

Bliss said she started feeding her livestock with about a quarter of her winter hay in July, and has begun to make arrangements to sell some of her cows and sheep.

“It's just really heartbreaking when you're shipping out a perfectly good cow because you can't feed her and you're not getting a good price,” she said. “(We) can't continue to keep losing money and throw money out the door.”

Last week, the Ontario government announced it would provide up to $5 million in funding as part of a federal-provincial agricultural support program to help farmers cover costs caused by drought and feed shortages. The province said that was in addition to $2 million in help announced in July.

The federal government also announced last week that it would fund up to $500 million for a program helping farmers in Ontario and several other provinces experiencing drought to access livestock feed, transportation and water.

Bliss said it would take at least $4 million in feed for Rainy River farmers to salvage just half their cattle.

“For us to lose half our cows -- which I do believe it'll probably be more, but I'm trying to be optimistic -- that is around $10 million in sales for this district alone for next year. That's a lot of money in a smaller community,” she said.

Reid, in Thunder Bay, said he appreciates the government funding but estimates the eventual cost of the damage caused by drought to amount to “billions.”

“It's not just my farm and the issues we have here. It's food security for our country,” he said. “We're not merely looking for a fix to the problem. We're looking for the ability to get through it with a core group that we can rebuild in the future.”

This report by The Canadian Press was first published Aug. 17, 2021.