Elementary school students can no longer switch between virtual and in-class instruction in November: TDSB 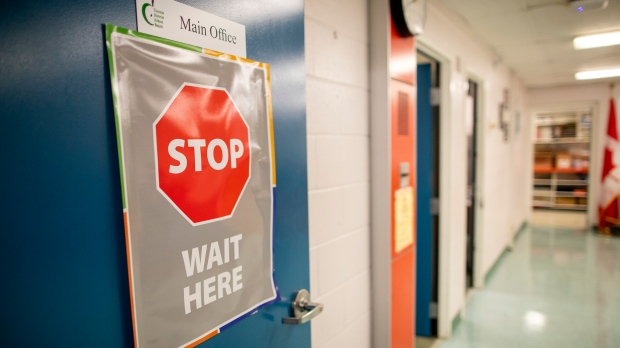 A sign outside the main office is seen at Kensington Community School amidst the COVID-19 pandemic on Tuesday, September 1, 2020. THE CANADIAN PRESS/Carlos Osorio

Elementary school students at the country’s largest school board will no longer be able to switch between in-person learning and virtual instruction before the end of the calendar year, the Toronto District School Board has confirmed.

Officials had initially said there would be three dates for students to make the switch between the two options throughout the school year but on Thursday night, the board decided to eliminate the November date "in the interest of stability" for staff and students.

"Based on the feedback that we've had during the recent transition that took place last week and in the interest of stability for students and staffing... we will not offer a November transition date," Manon Gardner, the TDSB's associate director of school operations and service excellence, said at Thursday night's board meeting.

"This is really to bring some stability for families, for students, for staff, so we can move forward with what is still on the agenda for us to do, (including) report cards, assessments, and a number of things."

Parents were initially told they would have until Nov. 6 to decide whether to switch between the two models for a Nov. 23 start date.

The board said many were concerned about how the November transition would impact the mental health of staff and students as well as staffing levels, academic achievement, and class sizes.

According to the TDSB, approximately 7,800 students requested to switch from in-person learning to virtual instruction prior to the first transition date on Oct. 13. At the same time, an estimated 4,000 switched from online learning to in-class instruction.

The TDSB had difficulties coordinating the transition and as a result, some students in virtual school were not immediately assigned teachers, prompting the school board to issue an apology.

In a tweet, NDP education critic Marit Stiles said the elimination of the November date for elementary students will be welcome news for many.

"I hear a huge sigh of relief coming," she wrote.

On Thursday night, TDSB Trustee Shelley Laskin tweeted, "I know many will be glad to hear this news."

Earlier this week, TDSB spokesperson Ryan Bird confirmed that the deadline for secondary students to transition between online and in-class instruction is currently "on hold" while the board undertakes a review of its delivery model.

“Staff will be looking at options that will provide greater stability for students, staff and families — in both in-person and virtual learning,” Bird said on Tuesday.