Etobicoke students declare #CropTopDay after teen told to cover up

TORONTO -- Scores of students showed up in midriff-baring crop tops at a Toronto high school on Tuesday in a protest that came after school officials deemed one teen's outfit inappropriate.

The movement began Monday when Alexi Halket bared her belly at Etobicoke School of the Arts after she wore a grey skirt and a black and turquoise top that looked a little like a sports bra.

She was called down to the principal's office and told to cover up after a teacher complained about her short top. She missed the rest of class because she had a lengthy discussion with principal Rob MacKinnon.

"I told him I had a line up of outfits planned out because this was my birthday week," said Halket, 18.

She said she was told to wear something "more appropriate" the following day, but felt that was giving in. They didn't come to an agreement.

So she went home, turned to Facebook and urged her friends to wear crop tops the next day.

MacKinnon, meanwhile, was alerted to the page and sent a note to his staff, preparing them for the protest.

"I encouraged teachers to talk about this with their students," MacKinnon said.

"It's about appropriate dress for this setting, not sexualizing students or objectifying them, but what's OK in school."

Students began posting photos of their midriffs on social media throughout the day leading up to a lunch-time discussion with the principal.

MacKinnon said he sat down with about 200 students in the school's library to discuss the issue.

"I'm very proud of them for talking about what they value -- critical thinking is important in schools," he said, adding it was a learning moment for both teachers and students.

"It's about approaching the line, but not crossing it, which is a struggle. It's an art school, so we're always pushing the lines."

MacKinnon said the school has a purposefully vague dress code, but some students have suggested codifying what is and isn't appropriate.

As for the crop tops, students and officials couldn't come to an agreement during the meeting.

"He said 'this is a professional environment,' so I said, 'yes, but the word professional comes from profession, meaning job, and this is your job, so I understand if you have to be professional, but I have to go to school and I'm going to wear whatever makes me comfortable."' 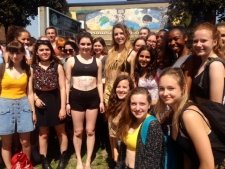 Students arrived at the Etobicoke School of the Arts wearing crop tops on Tuesday after school officials told one teen that her attire on Monday was not appropriate. (Cristina Tenaglia/ CP24)