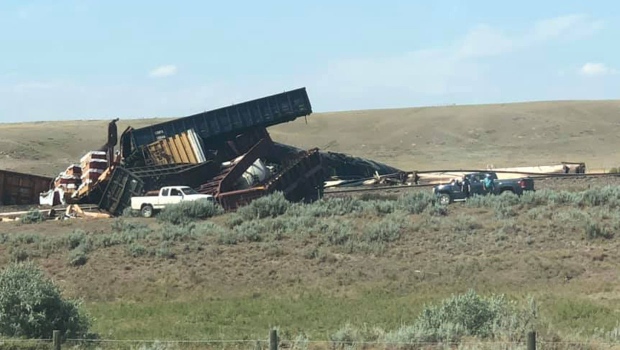 Trehia May posted these photos of a derailment of a freight train near the hamlet of Irvine on August 2, 2019 on Facebook. (Supplied/CTV News)

IRVINE, Alta. - Residents near a small community in southeastern Alberta have been told to evacuate the area as a precaution after part of a Canadian Pacific Railway train derailed.

The Alberta government issued the emergency alert for people living within 6.5 kilometres of the hamlet of Irvine, located along the Trans-Canada Highway east of Medicine Hat.

The province says the derailment involves chemical exposure, as well as damage to the rail line and disruption of road access.

There was no report of any injuries.

Witness Trehia Stevenson said she was driving down the highway with her mother when they came across the derailment moments after it happened.

“All of a sudden there was a ton of smoke. There was some kind of fire,” she said Friday.

“When we pulled up, we could see that the train was derailed. It was all piled up and the smoke was coming from it. I am pretty sure there wasn't any tanker cars. It was cargo cars.”

Stevenson said she could only see one car on fire, but there was a grass fire as well.

She said the derailment included about a dozen rail cars and was right on the western edge of the hamlet, less than a kilometre from homes.

Officials did not say what the train was carrying and whether there was a spill.

Canadian Pacific says the derailment happened at about 3:20 p.m. and it has dispatched a team to the site.

Area residents have been told to go to a reception centre in nearby Dunmore.

The province says part of the Trans-Canada Highway is closed near the derailment.