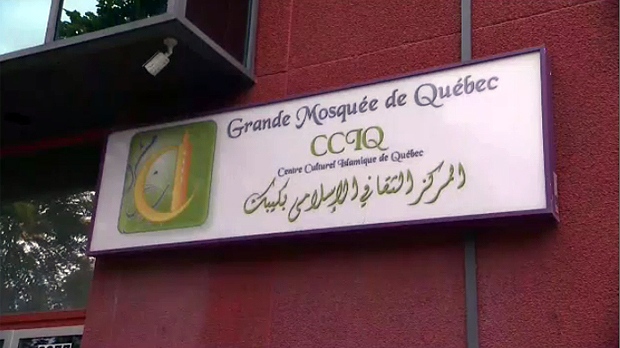 Four years after the deadly attack on a Quebec City mosque, victims of the shooting say they're still living with the impact.

Mohamed Khabar, who was wounded in the shooting, said it's impossible for him to erase the images of that evening from his memory.

“I saw my brothers falling under the bullets of the shooter,” he said Friday at an event marking the fourth anniversary of the attack. “And I heard the unbelievable screams of fear from the children who were present.”

Khabar said the bullets that remain in his body have made it difficult to work.

Aymen Derbali, who was left paralyzed by the shooting, also spoke at the event in Quebec City.

He said everyone has to do their part to oppose hatred and Islamophobia to ensure that similar events never happen.

“We hope for a better future for our children,” he said.

The event was one of a series of ceremonies organized by the Quebec City Islamic cultural centre and community groups to remember Mamadou Tanou Barry, Ibrahima Barry, Khaled Belkacemi, Abdelkrim Hassane, Azzeddine Soufiane and Aboubaker Thabti, who were killed shortly after finishing evening prayers on Jan. 29, 2017. Five others were wounded.

Earlier in the day, ceremonies began with a call on Ottawa for more action on gun control and for Quebec to recognize the existence of Islamophobia.

Boufeldja Benabdallah, co-founder of the mosque where the events took place, said the federal government's decision to name Jan. 29 - the day of the 2017 attack - as a national day of remembrance is a step toward healing for the victims and for society.

Remembering the tragedy will also help prevent similar events from happening in the future, he said at a news conference Friday morning. And while he lauded Ottawa for creating the day of remembrance, he said the government hasn't done enough to get handguns off the market.

He said while Ottawa has taken action on military-style weapons, it also needs to ban handguns.

Benabdallah and several other members of the mosque thanked Quebecers for their outpouring of compassion and support in the aftermath of the attack and in the years that followed.

Abderrahim Loukili, president of the mosque, said sharing hugs and having close contact with people will be missed this year because many of the commemorations moved online.

The day of remembrance announced by Ottawa Thursday will also be a day of action against Islamophobia, the federal government said.

“We know that dealing with the roots of racism, systemic racism and hate go beyond individual responsibility, we can and must act collectively,” federal Justice Minister David Lametti said at a virtual event organized by the Canadian Muslim Forum.

“We are not immune to extremism. Today's sad anniversary is a stark reminder that looking away has consequences, often for the most vulnerable among us.”

Lametti said the government has acted to further restrict guns but added there's still work to be done.

Quebec Premier Francois Legault refused to use the term Islamophobia at a news conference Thursday, instead describing the attack as an act of “racism.”

Addressing the ceremony Friday evening, Legault said the anniversary of the attack was a reminder to “never let our guard down against hate and intolerance.”

He said even the most horrible tragedies shouldn't divide Quebecers.

“It's a day to join together to say together, 'never again.”'

Sebastien Bouchard, one of the organizers of the commemorations, said that Islamophobia needs to be recognized and named.

Nora Loreto, another organizer, said, “We will always remember that this wasn't a random act of violence, that this was an act of targeted terrorist violence against six Muslim men.”