Ex-pastor charged in wife's death sedated her so he could continue affair: Crown 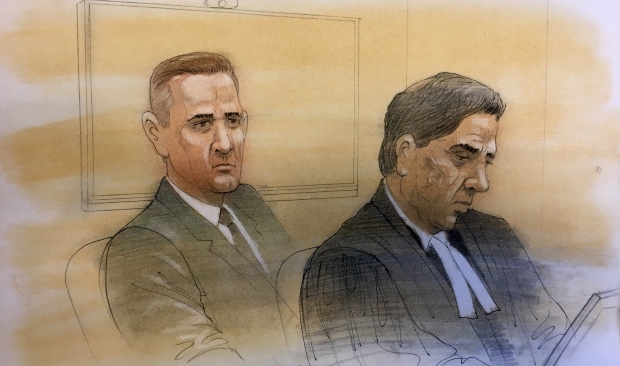 Philip Grandine is pictured in a court sketch with his lawyer on Feb. 1, 2019.

TORONTO -- A former pastor accused in the drowning death of his pregnant wife did not mean to kill her but wanted her incapacitated so he could carry on with his double life, prosecutors argued Monday.

Crown lawyers allege Philip Grandine either secretly administered the sedative lorazepam to his wife or offered it to her so she would be less attentive while he continued a clandestine affair.

In her closing arguments, prosecutor Donna Kellway said Grandine then failed to prevent his wife from getting in a bathtub in her drugged state one evening, putting her "directly into harm's way."

"He was playing Russian roulette with her chances of having some kind of so-called accident," Kellway said. "Knowing everything that he knew, he should never have allowed her to get into that tub."

Grandine has pleaded not guilty to manslaughter. His lawyer did not bring any evidence in the trial but is expected to lay out an alternate narrative in his closing arguments Tuesday.

Court has heard she was not prescribed lorazepam, also known under the brand name Ativan, but the drug was found in blood samples taken at her autopsy and three days before her death, when she went to the hospital after feeling sleepy, confused and disoriented.

Lorazepam is a sedative that can cause drowsiness, reduced muscle control and impaired memory, among other things, court has heard.

The Crown said while no one saw Philip Grandine give his wife the drug, there is "an abundance of circumstantial evidence" that he did so.

Anna Grandine was cautious about her pregnancy and would not knowingly have taken anything that could endanger her baby, Kellway said. She was prescribed anti-nausea medication but did not like to take it because it made her sleepy, the prosecutor said.

Her sister testified that Anna Grandine was scared when she first experienced symptoms a few days before her death, because she did not know what was causing them, the Crown said.

The effects were so strong that Anna Grandine was taken to hospital, she said, noting Philip Grandine would have witnessed his wife's reaction to the drug.

Anna Grandine's mother told the court her daughter also asked whether her husband had given her a pill, Kellway said.

"(Anna) Karissa never had a reason to take lorazepam ... but Philip had reasons to give it to her," the prosecutor said. He also had access to the drug through his job at a seniors' home where he distributed medication and disposed of the excess, she said.

Court heard Philip Grandine had been forced to step down as pastor at a Baptist church in northwest Toronto as a result of his affair with a parishioner, who was also his wife's friend.

He agreed to marriage counselling, which included conditions that he give up the affair and pornography, but Kellway said he sought to secretly continue with both.

In fact, the affair ramped up, and a filtering program meant to block pornography sites was uninstalled shortly before Grandine called 911 to report his wife's drowning, Kellway said.

"He wanted to have his cake and eat it too," she said.

Police examining the couple's computer found searches related to lorazepam, and while it was a shared computer, jurors should find it was Grandine who conducted them since searches for female escorts were conducted at the same time, Kellway said.

There were also occasions in which Grandine appeared indifferent towards his wife, Kellway said.

He mentioned the possibility of getting remarried hours after her death, the Crown said. Days later, in between having sex with his mistress, Grandine discussed with her whether she should attend his wife's funeral, Kellway added.

Kellway stressed Grandine is not on trial for cheating on his wife or for enjoying pornography, noting those are not illegal acts. But she argued those things form an "important backdrop" that illustrates his motive for ensuring his wife was sedated.

Jurors have been told this is Grandine's second trial in connection with his wife's death but were instructed not to speculate why.