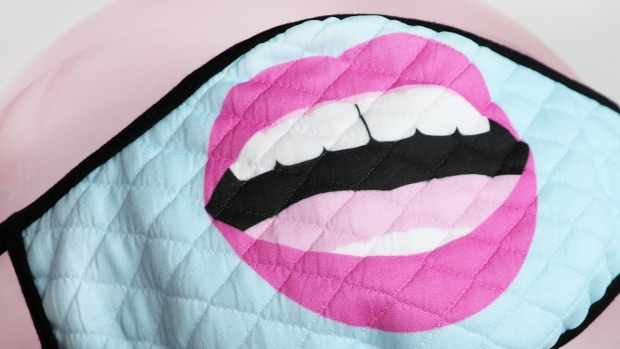 Toronto fashion designer Hayley Elsaesser was unsure about adding face masks to her clothing brand two months ago, ordering just a "small amount" of samples to test out demand through her online shop.

When those bold, colourful masks sold out "within two hours" she realized how popular they had actually become.

The COVID-19 pandemic has forced North Americans to be more accepting of the type of mask culture that has been widely adopted in other parts of the world.

And now Canadian fashion designers are catching up to their Eastern counterparts in making cloth face masks more vibrant and -- they hope -- more enjoyable to wear.

"This is something that's taking over half your face, so you might as well make a statement with it," said Elsaesser, who herself was inspired by Japanese mask fashion. "It can be a little bit weird to start wearing a mask in the first place. ... So by tying in the fashion statement, it makes it a little more palatable for people wearing them for the first time.

"It becomes something to be excited about, rather than (focusing on) the reality of why you have to wear a mask in the first place."

Elsaesser's masks, made of washable, quilted jersey fabric, sell on her online shop for $25, with 20 per cent of her profits donated to the Food Banks Canada COVID-19 Response Fund.

Her patterns are bright, distinct and quirky -- like the one with 8-balls donning blue cowboy hats on a leopard-print background, or the one with teal and pink beetles scattered over a light purple backdrop.

Elsaesser says those wacky patterns represent her own personal style. But they have added benefits as well.

"Obviously safety is more important than looking fashionable but it's really important to help your mental self feel good too," Elsaesser said. "Something that really helps my mental health and just being a more positive person is putting on an outfit that lifts my spirits.

"And I've noticed that people react really positively to me when I'm wearing a cute printed mask."

Elsaesser said she was initially hesitant to sell the masks out of fear of being viewed as someone who was capitalizing off a pandemic.

Other Canadian designers struggled with that too.

Katrin Leblond, designer and owner of Montreal's Boutique Katrin Leblond, said she received hate mail when she added cloth masks to her online shop early into the pandemic.

Leblond was on vacation in Barbados in March when COVID-19 started spreading internationally. She decided then to halt production on her spring line and focus her efforts on making and selling reusable masks for the general public instead.

"People were rushing around buying Lysol and toilet paper, and it just didn't feel right trying to promote this beautiful new collection that I made when that wasn't where people were at," Leblond said.

"I was just intuiting what was going on and when I posted the first batch of 50 masks, I got hate mail, like full-on: 'you greedy corporate pig profiting off a pandemic.' So it was really intense. ... But (the masks) sold so quickly. So the numbers and the messages were contradictory."

Leblond estimates she sold 5,000 masks during her first month, forcing her to find a new fabric cutter who could cut larger quantities at a time.

She uses her own custom prints -- mostly bright florals and nature motifs -- and sells masks in a variety four-pack for $79. They're made of organic cotton and they're reversible, with a plain backside.

Leblond also sells unprinted black masks, at the insistence of her 25-year-old brother who thought she should diversify a bit from the usual "joyful, feminine, folk-art inspired" tone of her designs.

Lennard Taylor, owner of the Winnipeg-based Lennard Taylor Design Studio, says colourful face masks have become a means of self-expression at a time of increased loneliness and anxiety.

"This is the new way of smiling," he said. "It's (about) wearing a fun, funky print that will make somebody else smile underneath their own mask."

Taylor has produced 60 different patterns that reflect his "modern and sophisticated" fashion style, but only one is shown on his site. Customers can make certain requests -- a preferred colour scheme, for example -- but orders are filled based on what's in stock on a given day.

Taylor said he also received criticism when he decided to sell his $20 cotton masks, but he saw the new venture as a way to keep his employees working during a time of mass layoffs around the country.

"I'm doing my best to keep my business going, paying my employees and having a little bit extra money that I can donate to various charities in my city," he said.

While fashion designers don't know how long the need for non-medical masks will last, they do believe the pandemic is changing the way North Americans perceive them.

"Oftentimes things formed out of necessity eventually turn into something designers take and make into fashion, so hopefully it's something that becomes more sought after versus being seen as a negative thing," Elsaesser said.

"I thought this was going to be a really small blip on my website, but it doesn't seem to be going anywhere."

Leblond says the desire to express beauty through fashion won't go away either.

"My whole life has been answering the question of: is what I do superficial? Is fashion superficial?" she said. "And I've found that beauty makes people happy ... maybe now more than ever."