Fear of deportation could keep migrant workers from getting tested: Horwath 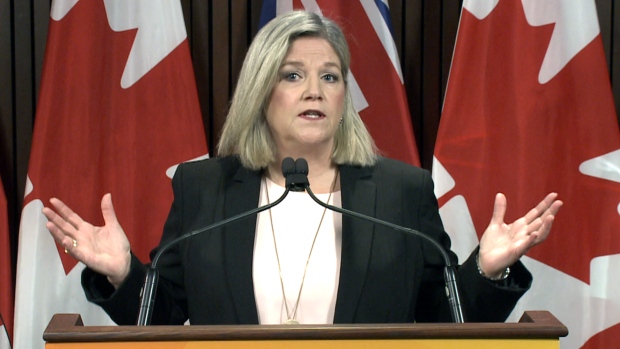 TORONTO -- Hundreds of migrant workers have been tested for COVID-19 in Windsor-Essex, an Ontario region dealing with outbreaks on farms, Premier Doug Ford said Tuesday, but critics cautioned that fear of deportation could keep thousands more from getting tested.

Ford said the province could not force migrant workers to take the tests, but added that the reception among both workers and farmers had been positive.

"So far we've tested 724 workers, we put a testing unit right in the heart of the community," Ford said.

But with as many as 8,000 migrant workers in Windsor-Essex, and 20,000 working across the province each year, some people are calling for mandatory testing.

Dozens of migrant workers in the Windsor-Essex region have tested positive for COVID-19 and two have died. Nine farms have active outbreaks of the virus.

Outbreaks have also been reported in Chatham-Kent and Haldimand-Norfolk, where dozens of workers have tested positive.

NDP Leader Andrea Horwath said she wouldn't blame migrant workers if they were wary of getting tested, saying they find themselves in a precarious position.

"These folks are literally at risk of being deported if they are not able to provide the labour that they are supposed to be providing to the farm," she said. "So that's one huge deterrent, so there has to be a guarantee put in place that they're not going to be deported and that their health and well-being is going to be looked after and that they're going to be able to isolate."

Ontario reported 184 new cases of COVID-19 on Tuesday and 11 more deaths. Roughly two-thirds of the new cases come from Toronto, Peel Region and Windsor-Essex -- the only three areas that won't enter Stage 2 of the province's reopening plan Friday.

Meanwhile, the City of Windsor said it was expanding an isolation centre for migrant workers who have tested positive for COVID-19. The centre was initially set up to help the city's homeless population.

Mayor Drew Dilkens said the city had heard from local farmers that they were having difficulty finding appropriate space for workers to self-isolate if they test positive for the virus.

Expanding the isolation centre should help alleviate that problem, he said.

"Public health officials have indicated that the need to isolate after a positive test result has become a barrier to increased testing of the migrant population," he said in a statement.

The city is taking immediate steps to remove that barrier, he said, calling for testing of all migrant workers in Essex County.

The costs associated with the facility will be charged back to the affected farms, Dilkens said.

Tuesday's new COVID-19 cases brought the province's total caseload to 32,554, an increase of 0.6 per cent over the previous day.

The total included 2,538 deaths and 27,431 resolved cases -- 218 more than the previous day, continuing a trend of resolved cases growing more quickly than active ones.

The numbers of people in hospital and in intensive care with COVID-19 both dropped, though the number of people on ventilators rose slightly.